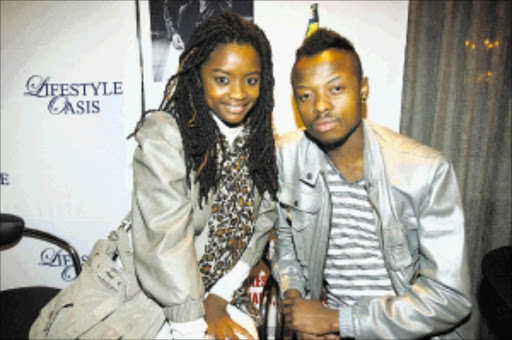 IT SEEMS love is in the air between two Generations actors who also play the parts of lovers on screen.

Sowetan has been reliably informed that Jafta Mamabolo, who plays Matthew, and Samkelo Ndlovu, DJ Lulu in the television series, are dating for real.

The two were seen cuddling at Linda Moeketsi's birthday party at The Bank in Rosebank last Friday.

The birthday party was also attended by other Generations cast members who included Nicholas (Thato Molamu) and Sharon (Kagiso Rakosa).

The two lovebirds were inseparable and followed each other all night long.

Ndlovu, who hails from Alexandra, used to date Thomas Gumede, who shot to fame on SABC1's A Place Called Home.

A source close to the young lovebirds told Sowetan that the two had been seeing each other for some time, though they had clearly been trying to hide it.

"Things started happening when they started working together on Generations, though they kept it under wraps for some time.

"You clearly cannot blame Jafta for falling for Samkelo. The guy spends a lot of time on set with this irresistible and gorgeous lady."

The source said the couple had travelled by bus with other celebrities to this year's Durban July Handicap.

Approached at the party to comment on their affair, the shy couple would only say they were "good friends" and left it at that.

Sowetan has learnt that when Ndlovu celebrated her 21st birthday sometime this year, former boyfriend Gumede showered her with lots of gifts that included motivational books and other goodies.