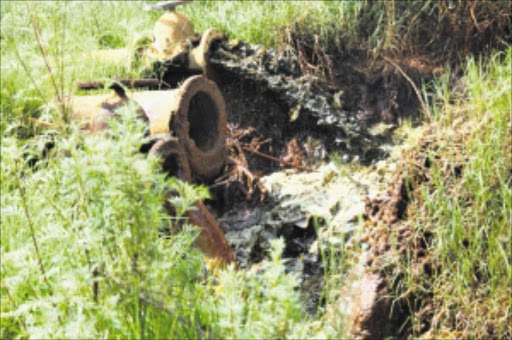 THE government will face legal action if it does not present an action plan to environmentalists about acid mine drainage within the coming week.

A coalition of attorneys and environmentalists this week wrote to the Inter-Ministerial Committee (IMC) on Acid Mine Drainage demanding transparency and evidence of concrete action on the matter.

According to the attorneys and environmentalists nothing has been done in the five months since the IMC was formed to stem the flow of millions of litres of acidic water on the West Rand.

"They have until February 2 to present what action they are taking and, depending on their response, we will then decide what legal action to take against them," Centre of Environmental Rights attorney Dina Townsend said..

Acid mine drainage is water flowing over acid-bearing rock that has been exposed through mining. The water turns toxic as it rises to the surface of disused mines and makes contact with the air. It contains sulphuric acid, minerals and metals.

The acid mine drainage is an issue that was predicted in 1996 but, according to environmentalists, it was ignored until 2002 when the Tudor Dam on the West Rand, which is the smallest basin, flooded.

Townsend said the government was not fulfilling its obligation to secure a healthy environment despite a commitment last year that it would do so.

Centre for Environmental Rights and other civil organisations said the IMC has failed to take significant steps to address and halt the discharge of acid mine drainage.

"We are arguing that where the state has failed to take reasonable measures it is in violation of its constitutional obligation," Townsend said.

This pollution is affecting communities built on the tailings, which contain radioactive material.

"Poor people suffer the most because of the toxic pollution. They ingest the chemicals and this can lead to heart and lung disease and cancer," Judith Tayler of Earthlife Africa said.