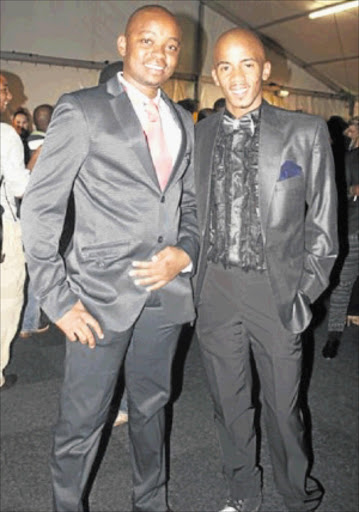 Khanyi Mbau was sitting quietly in a corner. Strange seeing her alone. We kept looking for some old man lurking around but she was really alone. Has she lost her magic?

With almost every Generations actor there, you would have sworn it was the soapie's 5,000th recording.

* Jafta Mamabolo, aka Matthew, who seems to be at all the parties Phosho attends, pitched with new lover Samkelo Ndlovu, aka DJ Lulu in Generations. They have made their screen romance a reality.

* We spotted Kagiso Rakosa, who plays Sharon in Generations, in the VIP lounge. Her jealous boyfriend was clinging to her for dear life.

Those who know what is good for them kept away from the man, who looks like a bouncer.

Sharon should leave this frightening character at home next time she goes jolling.

* Thato Molamu, aka Nicholas, was the only guy who was all over the place.

We don't know whether he was trying to impress the women or showing off his extremely big eyes.

* We spotted gogos of the entertainment industry Zama Ngcobo and Rami Chuene trying to dance, but the music was way to heavy for them and they were dancing against the beat.

* We saw Khanyi Mbau sitting quietly in a corner.

Strange seeing her alone. We kept looking for some old man lurking around but she was really alone. Has she lost her magic?

* The Kwela Tebza boys, who now call themselves Kwela Men, bragged that they have grown and are performing at jazz shows.

* Busi Lurayi is such a Ghetto chick. She danced like it was her last day on earth, reminding people that she is the girl from the TV drama Sokhulu and Partners.