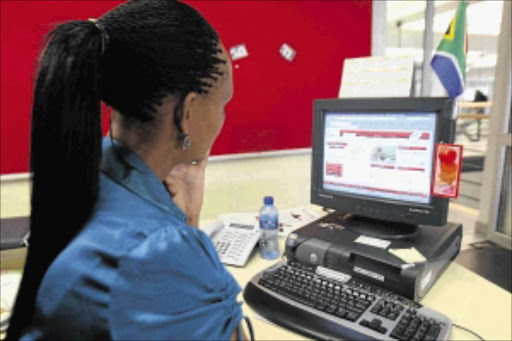 Couple told they could double their money in three months

DON'T be fooled by salespersons who promise you instant wealth by trading shares online. Scrutinise the products or you might be throwing away your money.

Click 2 Trade, which operates from 67 Port Road, Robertsham, Johannesburg, has been accused of encouraging consumers to invest in speculative software and then failing to deliver.

Since buying the product Georgina and Lazarus More have been arguing and accusing each other of letting their family down.

The director, Andrew Saunders, promised them wealth, but they only got empty promises, they said.

Their misfortune started in March last year after a Liberty Life agent, Memory Muzamhindo, introduced Saunders to them.

Georgina More knew Muzamhindo, who had once sold her a good investment policy.

Saunders told her his business entailed trading shares online and to participate, she had to pay a joining fee of R20,000.

"He assured us our money would increase to twice as much in three months."

They were told they could even make bids on the United Kingdom stock market if they bought CMC Market shares in the UK.

Saunders would buy the shares once the money was deposited into his account. After some persuasion, they deposited the money.

Their nightmare started a few weeks later when they could not get hold of Saunders and he did not respond to their e-mails, they said.

"He failed to train us after promising that by last October we would be independent and trading and will have doubled our money," she said.

They asked for their money back, but Saunders said they could only get R11,000 because he had already bought their trading package, which they have not received yet.

He offered to extend their training until January this year, but did not keep his word, More said.

Saunders told Consumer Line that he would not refund their money because the couple had threatened his mother.

He also said that the contract could not be cancelled because they had not done so within the five-day cooling off period. But there is no such clause in the contract, which also exonerated him from any liability for monetary loss or damage or otherwise that might result from any information provided or training given.

He accused the Mores of giving him an incorrectly signed bank statement.

He then said that Georgina More was not his client.

"I paid her joining fee to I-Quote Trading after I received her payment. This was forwarded to CMC Markets UK. She is their client, but the documentation has not been completed. She has an I-Quote client number and is registered as a new client at our head office and is entitled to a full training and mentorship programme," he said.

Saunders said he was initially prepared to assist the couple, but would no longer do so because Lazarus had threatened his mother and a lawyer representing Georgina contacted him in December last year.

"He accused me of refusing to refund the money or provide the training. I have never refused to refund Georgina the money, I am not financially able to do so. I have never refused to provide her training. Our training is provided by our Pretoria office and Georgina and Lazarus can attend as much training and mentorship as they require," Saunders said.

Derek Pearce, owner of I-Quote Trading, said this was an unfair business practice which his company did not encourage. He is investigating the complaint.