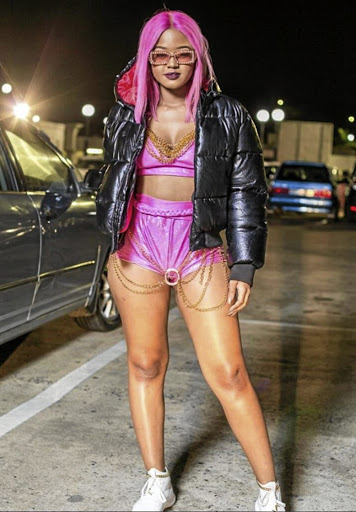 Babes spent yesterday in church and not with her ex Mampintsha

Gqom Queen Babes Wodumo is not back with her former boyfriend Mampintsha despite him saying they were fine at the weekend after reports that he had physically abused her.

Her manager, Keke Mokoena, said Babes had been in Johannesburg the whole weekend and had not spoken to Mampintsha despite him issuing a video clip where he claimed they were fine.

He said Babes, who spent her Sunday at church, was still coming to terms with her ordeal. "Babes is still very hurt and disappointed but she will be fine," Mokoena said.

Metro FM DJ‚ Masechaba Ndlovu‚ on Friday afternoon confronted Babes Wodumo on allegations of abuse that the musician had allegedly endured at the ...
Entertainment
4 years ago

"The minister has nothing to do with this," said Cele's spokeswoman Nonkululeko Phokane.

This was after Ndlovu posted a tweet on Saturday sayingCele had offered Babes protection. Phokane said she had spoken to Cele and Ndlovu, and that the matter would be rectified.

She said Babes had the right to approach any police station if she needed help.

A video clip of Babes, whose real name is Bongekile Simelane, being interviewed on air by Ndlovu sent shock waves on social media at the weekend.

Ndlovu had confronted Babes on Friday about allegedly being physically abused by her long-time former partner and record label boss Mampintsha, whose real name is Mandla Maphumulo.

On Saturday, Ndlovu took to her Twitter and said: "I've just received an update from Babes management that Min Bheki Cele has offered her protection. We are truly thankful. #Notinmyname."

IN FULL | Mampintsha responds to abuse claims: I may have overreacted

Mampintsha has responded to what he has called the 'hysteria' in the wake of the interview.
Entertainment
4 years ago

The post had been retweeted more that 7000 times and had been liked more than 22000 times by yesterday afternoon.

When first contacted, Mokoena claimed his client was offered protection by Cele. "The tweet is correct. They are trying to protect her."

However, when he was called back to say Cele's office had denied this, he said Cele had advised that Babes should get a protection order.

Ndlovu's manager Vusi Ndlovu declined to comment, saying questions regarding the matter should be directed to the SABC.

However, Kganyago said Ndlovu did nothing wrong during the interview despite that some people had complained Babes had been ambushed.

He said issues raised
during the interview were
already in the public domain and Ndlovu had taken the opportunity to get clarity from Babes. "It was a good thing that she raised the issue at this time."

Attempts to reach Mampintsha were unsuccessful as his phone went unanswered.

However, he released a statement on Saturday denying the allegations.

Twitter has been divided about how Masechaba handled the interview.
Entertainment
4 years ago
Next Article