BOOK REVIEW | A Significant, historical narrative on the murder of Struggle hero Timol

21-year search for the truth about uncle's death 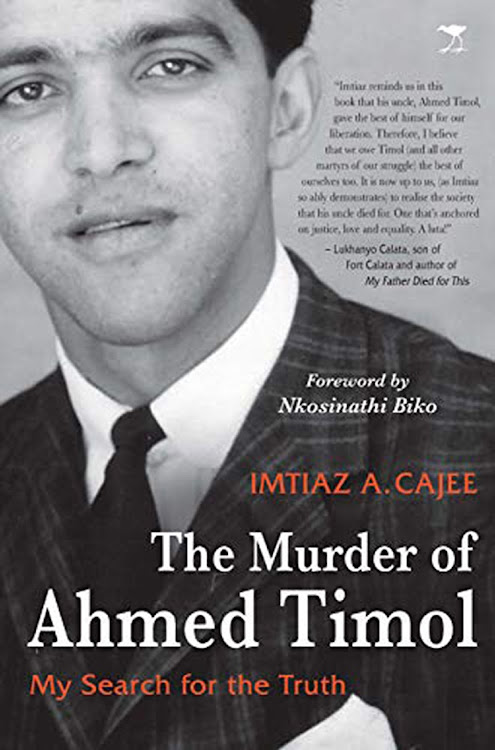 The Murder of Ahmed Timol – My Search for the Truth.
Image: Supplied

Book: The Murder of Ahmed Timol – My Search for the Truth

When I was in primary school in the 1980s, two state institutions had already put the fear of apartheid hell in my heart. These were the Modderbee Prison in Benoni and John Vorster Square, police headquarters in Johannesburg. This was due to horrifying tales we heard as children in my community in Tembisa, from older people.

I never saw Modderbee during my childhood, but my father showed me John Vorster when we drove past the grim, intimidating building on the west end of the CBD.

One of the atrocities that happened in that building in the early '70s is the subject of this book. Driven by the quest to find the truth about the death of his maternal uncle Ahmed Timol, the writer, Imtiaz A. Cajee, ended up penning a book overflowing with information. The narrative stretches far beyond the details of Timol's death, but with every piece of it pointing to relevance of the story of Timol as the beloved member of his family, community and anti-apartheid movement.

Timol was just 29 when he died at John Vorster. The regime at the time recorded his death as suicide by jumping out of an interrogation room on the 10th floor of the building. A teacher by profession, Timol was detained by the security branch shortly after his return to SA from exile to set up underground structures for internal operations of then banned SA Communist Party and Umkhonto weSizwe, the military wing of the ANC.

Cajee grew up not knowing much about his uncle as he died when he was very young but, by  his own admission, he always knew there was a hole in the fabric of his family because of Timol's death. Cajee too was emotionally affected and that set him on the path to finding the truth, and to seek the reversal of the outcome of the inquest which relied on the testimony of one insignificant constable to uphold and document the lie that Timol committed suicide.

Though the book is essentially about discrediting the 1972 inquest which absolved the police, a decision largely informed by the performance of the state’s star witness and Joao Rodriques, a junior officer, Cajee managed to document episodes of history that were probably never going to see the light of day.

Apart from telling the story of Timol, who was born in Mpumalanga of parents who were born in India (indicative of his mother testifying in Gujarati at the Truth and Reconciliation Commission), the book is also autobiographical in the sense that it relates the story of the author and how he was himself inducted into the anti-apartheid movement.

It took Cajee 21 years of research before The Murder of Ahmed Timol was finally published. The effort has turned out to be a treasure trove of stories about the freedom Struggle, the contribution of the Indian community, the determination by activists to acquire education and Struggle luminaries Timol encountered during brief but joyous exile years in England where he also fell in love.

When Timol was killed, his younger brother Mohammad was in solitary confinement for 141 days and was refused permission to bury his sibling. Mohammad later went into exile, got married in Zimbabwe but the bigger story about him gives a glimpse into how the post-apartheid intelligence service think-tank was melded in exile.

Another significant factor in the book, even though not aggressively driven through, is the importance of the Islam faith to the author’s life.

From cover to cover, The Murder of Ahmed Timol (with a compelling foreword by Nkosinathi Biko) has proven its case as among significant historical narratives to be published in recent years in SA. It is also admirable that Cajee managed to use a calm voice to tell the story of his beloved uncle, a Struggle hero.

The government is likely to launch an investigation into claims of political interference in the prosecution of Truth and Reconciliation ...
News
2 months ago

Joao Rodrigues, the apartheid-era security police officer charged with the murder of activist Ahmed Timol in 1971, died at his home on Monday night, ...
News
11 months ago

Joao Rodrigues, the former Security Branch clerk charged with the murder of activist Ahmed Timol in 1971, has approached the Constitutional Court in ...
News
1 year ago
Next Article