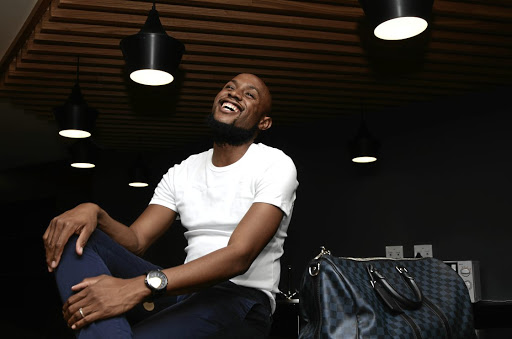 Mohale Motaung is about to make his acting debut in MTV's HIV-themed series 'Shuga'./Mduduzi Ndzingi

Fresh-faced actor Mohale Motaung knows exactly how to dodge the bullet when it comes to addressing the "oooh shem" elephant in the room.

The 24-year-old, who arrives for our chat toting a Louis Vuitton duffel, looks unshaken, poised and eloquent as he sets the record straight.

Did Mohale get his breakout acting role in the new season of MTVShuga because he's the fiancé of superstar Somizi Mhlongo?

"I know people are going to talk about that, but I don't really want to talk about it," answers Mohale with his legs neatly crossed and posture erect. Someone once called it the "polite boy" posture.

"Mostly I just want to focus on what I'm bringing to the table on this show.

"Let their opinions be theirs. I'm more concerned about educating people about PrEP (pre-exposure prophylaxis) and HIV/Aids."

A day later Mohale has cameras flashing as he arrives twinning in black and walking hand-in-hand with Somizi at the show's premiere in Montecasino. He is one of the new cast members in the educational youth drama joining Thuso Mbedu, Given Stuurman and Ayanda Makayi.

He portrays openly gay character Odirile throughout the 10-episode series that explores innovations in HIV prevention like precautionary medication such as PrEP and self-testing.

"For the role I got to learn more. I spoke to a few doctors and clinics were PrEP is offered and that offered me a lot of light."

Born in Kibler Park, southern Johannesburg, Mohale is sandwiched between two sisters. Relating his own coming-out story he says: "I didn't come out per se.

"I think my parents know me and they have always seen it. I didn't have to sit them down and say 'mom and dad I'm gay'. I think with their knowledge it made it comfortable in the house that 'we have a gay son'."

Somizi and Mohale's families unite to celebrate their engagement

Seven months after Somizi popped the question to Mohale‚ their families joined forces to celebrate their union.
Lifestyle
3 years ago

He started the degree with Unisa years ago after high school but stopped "because I felt like I needed to work". He went into retail.

For the first time as we talk, Mohale doesn't sound rehearsed, guarded and automated as he speaks of his mom. She is a court interpreter, he tells me in a relaxed childlike voice that sounds refreshingly natural and not robotic.

"My mom makes me happy. She's very supportive. She will send me a random message when she's getting ready for work at 5 in the morning and just say 'son, I love you'.

"You wake up to such a message it warms your heart and makes your day. She does that almost every day.

"It's important to me because I have always wanted to maintain a good relationship with my parents above friends, work and so forth."

Mohale refuses to touch on his hot romance with Somizi. Which prompts me to ask him, does it ever get tiring that people always want to know details of your courtship?

To which I get a blueprint model answer: "If I'm a public figure I've put myself out there. So I wouldn't say people asking me about my relationship all the time is annoying.

"People have made romance so generic. People want to see a love story that either ends well or doesn't end well.

"I think it's just important to look at what drives romance."

Mohale is working with an acting coach and I guess the jury is still out on his acting. Only time will tell.

Shuga starts on Tuesday on MTV Base.