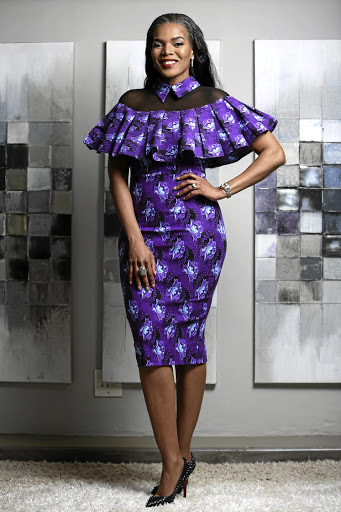 Connie Ferguson's meteoric rise as a TV mogul is the reason I have been chasing her for a sit down since The Queen kicked off over two years ago. At every attempt, I've politely gotten from a media liaison: "Mrs Ferguson's schedule is busy at the moment ... she is not available for interviews."

Now the Mzansi Magic telenovela is in its third season and I finally corner Ferguson on a breezy spring night at the annual Glamour Women of the Year Awards. She is being honoured among 10 outstanding women such as Kefilwe Mabote, Doreen Morris and Shekhinah.

The 48-year-old actress is a regal beauty in a royal blue Scalo by Sello Medupe lace-embellished gown, crimson lips and a high ponytail. "What a way to end the year. What an honour because I find that people in our industry are recognised posthumously. So to be recognised when you are still here, we say thank you," she gushes.

Ferguson is enjoying her newfound role as a TV mogul, dominating Mzansi Magic's weekdays primetime line-up as creator of telenovelas The Throne and The Queen. Through her production company Ferguson Films, co-founded with husband Shona, they have in the last five years kept viewers on the edge of their seats with dramas The Imposter, Unmarried, Rockville and Igazi.

Ferguson has enjoyed longevity in the entertainment industry throughout her 29-year-long illustrious career.

"Starting Ferguson Films has been the greatest highlight for me because it was a long time coming. I have acted for the better time of my life and I think I made a lot of money for producers. I'm passionate about it. But to be on the other side, being involved in the business side of it and making a significant difference in people's lives, gives me much joy."

The career of The Queen's lovable scene stealer, Thembsie Matu, has been a marathon, rather than a sprint to the top.
Entertainment
3 years ago

Following her long run as Karabo Moroka on Generations, she departed the iconic character in 2006 in favour of a villainous role. Ferguson slipped into character as the titular matriarch Harriet Khoza in The Queen.

In season one she becomes the show's new drug lord, or perhaps black widow, after murdering her husband.

"I did not anticipate that the role will be this big, especially because it's on a pay channel," she admits.

"I always felt that I will be living with the ghost of Karabo for the rest of my life.

"But when Harriet was able to break the mould and allowed people to see me in a different light, it was gold."

The role also saw the ageless beauty make a bold fashion statement by embracing her grey locks. Ferguson reveals that her late mother inspired her to stop dying her strands black. "My late mom started growing grey very early on in her life, in her 20s I think. By the time she passed on at 68 she was completely grey.

"So with Karabo being the modern woman, I used to colour my greys just a little bit. So with Harriet, I asked myself, 'why are you colouring your hair?' because I don't mind being grey."

Ferguson celebrates her 17th wedding anniversary at the end of the month. The secret behind the success of her evergreen marriage? "There is no secret. My husband and I adore one another as friends," she shares. "He's my dawg, then the father of my children and then my husband. The love and respect there, is just so unimaginable that even when we disagree it's never a fight."

Ferguson is also a grandmother to her eldest daughter Lesedi's three-year-old son Ronewa.