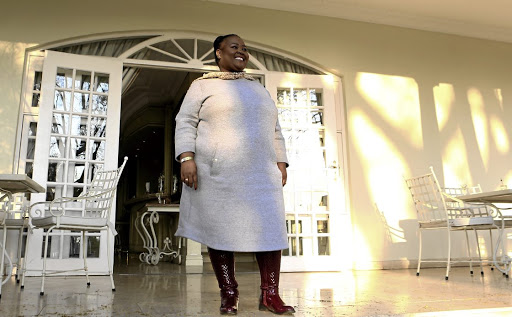 'The Queen' actress Thembsie Matu, who is nominated for Favourite Actress at the DStv Mzansi Viewers' Awards.
Image: Masi Losi

The career of The Queen's lovable scene stealer, Thembsie Matu, has been a marathon, rather than a sprint to the top.

While she got her first taste of acting on stage in 1987, working with veteran playwright Gibson Kente, it has taken her more than three decades to hit the big time.

After 31 years in the industry, Matu's role as matriarch Gracious Mabuza's (Rami Chuene) overbearing housemaid Petronella on the Mzansi Magic telenovela has given her her third act in life.

The bubbly 52-year-old actress has proven that you don't have to be the star of the show to win the hearts of a nation.

"Things are going so well for me this year," she excitedly observes. "You wait for moments like this to see that God is there. All I had was hope, but at the same time I was working towards my dreams.

"Sometimes when I'm sitting by myself I do a little introspection. Is it me really here? Sometimes I don't believe it. I believe I still have so much to give."

Queen B a nominee for favourite personality.
Entertainment
3 years ago

There is no dimming Matu's shine. She just got her long overdue stamp of approval. She is nominated in the second annual DStv Mzansi Viewers' Choice Awards for Favourite Actress alongside a legion of industry heavyweights.

When the awards take place on November 24, she will duke it out against co-star Chuene, Isibaya star Linda Sebezo, The River actress Moshidi Motshegwa and Skeem Saam vixen Lesego Marakalla.

At the nomination party held at the scenic Summer Place in Sandton, Johannesburg, everyone wants a piece of her. Although she remains gracious, she is visibly overwhelmed by the outpouring of love.

In a room full of It-girls and hunky leading men such as Motsoaledi Setumo, SK Khoza and Thabang Molaba, she steals the spotlight. She looks more at peace once we rescue her from an avalanche of fans demanding their selfie time with Petronella. On a crisp Tuesday evening, we gather for our tête-à-tête around a patio garden table as we enjoy the beautiful sunset.

"I'm so happy and humbled by this nomination. I hope I take it in my category," Matu says before she jokingly adds: "I hope on the big night I can get a sponsored look, so I can also be able to say 'I'm wearing David Tlale or Thula Sindi'."

Let's face it, Matu's comic timing is remarkable. It's the stuff that can't be taught. It comes as no surprise when she reveals that some of her memorable scenes on The Queen are improvised. Who can forget her Omunye Phez' Komunye parody?

Wanna get pregnant fast? The Queen's Petronella 'knows a guy in Germiston'

The domestic worker (and part-time life coach) dishes out advice like disses on a Pusha T diss track.
Lifestyle
3 years ago

"They always give me the script, obviously, but then I always add something extra and that ends up being what people like," she points out.

Just like Connie Chiume's historic role in Black Panther, Matu shares that her role in The Queen came at a point when she was extremely frustrated with the lack of roles for older women on screen.

"I was hungry. I was hungry to show my full potential," Matu recounts.

"I'm sorry to say this, but I had been asking at Rhythm City, 'Why don't you write more material for me?' I was told 'I'm sorry, Rhythm City is a youth show, blah blah'.

"Shona [Ferguson, a co-star and one of The Queen's creators] then approached me and told me they were writing something specific for me.

"I was then given the script. The only thing I was told was that Petronella is an old woman from a rural area and the rest I was left to figure out for myself.

"I then decided since my character on Rhythm City was Zulu, let's make Petronella Xhosa. I like that they have given me so much freedom to play around with the character from the beginning."

The married mother of two has also recently ventured into stand-up comedy. She featured at the Diamonds and Dorings comedy show in Kimberley in March alongside noted comedians Celeste Ntuli, Mpho Popps and Jason Goliath.

"I was booked before I even realised I did not have material. But because I just talk and people get excited, it all worked out."