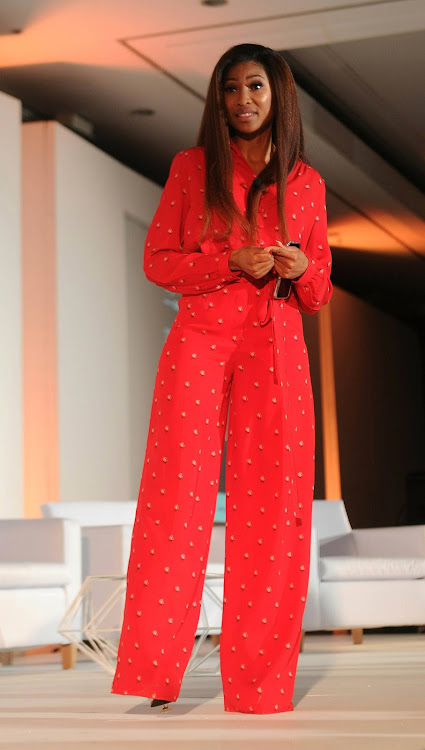 Actress Enhle Mbali Maphumulo has for the first time opened up about her husband and internationally acclaimed DJ Black Coffee's open-secret infidelity that dominated headlines a few years ago.

Maphumulo didn't hold back as she took to the stage at the inaugural In Good Company Experience Summit in Sandton, Johannesburg, on Tuesday night. She was one of the speakers alongside American actress Issa Rae and Thandiswa Mazwai at the female empowerment event.

"How do we as women stand here all month and salute ourselves for all this power when we cannot say on a simple situation that a sister did you wrong?" she asked a room full of women and a few men.

"Yes, everyone is equally to blame," she said, before pointing at her husband in the audience and saying "I love you" to him.

"A sister did me wrong. I heard comments such as 'she thinks she's perfect, even Beyonce gets cheated on'. My own sisters make their way to my husband's inbox in the industry and out of the industry. The very same sisters that I fight for."

She said at the time of the infidelity reports, she enjoyed a lot more support from men than she did from women.

The couple made headlines in 2013 when Sunday World reported that Black Coffee had a clandestine affair with model and aspiring businesswoman Pheladi Makola.

It was also revealed that she had threatened to reveal saucy details of their affair if she was not paid money.

Maphumulo told the paper: "I wish this woman would leave me alone. She has been harassing me for the past two months, running to the media and trying to extort money from us. She's asked for amounts of R3500 right up to R20000.

"She threatens to beat me up. I'm tired of this girl and her fabricated stories. I want her to leave me alone. Even if they did sleep together, why is she involving me? Whatever problems my husband and I have, we'll work through them."

A FREE State woman is demanding R100000 from DJ Black Coffee after stumbling on a sex video of him and his nyatsi. Sunday World can exclusively ...
News
7 years ago

The Free State woman who tried to blackmail DJ Black Coffee with a sex tape has been released on bail. Hawks officials have confirmed that the woman ...
News
7 years ago

On Tuesday, Maphumulo also talked about her fear when she turned 30 in March, growing up in the public eye, her mother having her at age 18 and her father having 11 children with different mothers.

The couple, parents to two children, had a star-studded wedding ceremony in January last year. They had been married for seven years already at the time.

"I'm a lover of men, hence I married one. I like everything that men bring and I understand how human all of us are. But my journey here is to make sure that women understand what sisterhood is. The depth of how much we hurt each other comes from the fact that we are hurt."

Yvonne Chaka Chaka received an honorary award for her humanitarian work on the continent at the event hosted by Nomzamo Mbatha.