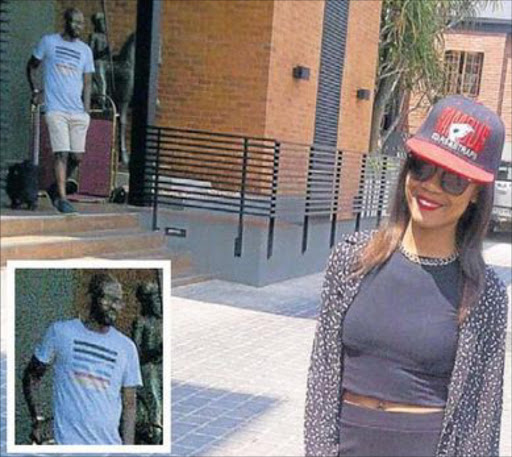 DJ Black Coffee and his actress wife Mbali Mlotshwa have become the latest famous couple to be embroiled in an apparent blackmail scandal involving another woman.

The couple, who have been married for two years, claim they are being harassed by model and budding businesswoman Pheladi Makola.

"I wish this woman would leave me alone. She has been harassing me for the past two months, running to the media and trying to extort money from us," Mlotshwa said.

"She threatens to beat me up. I'm tired of this girl and her fabricated stories. I want her to leave me alone. Even if they did sleep together, why is she involving me? Whatever problems my husband and I have, we'll work through them," she said, fighting back tears.

The couple considered opening a criminal case against Makola, but police records show no docket was opened.

The Pretoria beauty had a different story to tell when she met Sunday World this week.

She denies the extortion claims, saying the only money she asked for - and got - was R7000 that Black Coffee offered as reimbursement for a shoot she missed because she went away with him.

"Mbali is just embarrassed that this has all blown up. They're stooping very low now. It's crazy to say I have been harassing them.

"I'm not even a fan of Black Coffee's. He approached me on Twitter and wanted to hook up," said Makola.

According to her, the DJ - real name Nkosinathi Maphumulo - started following her on the social network in February and when she reciprocated, he sent her a direct message almost immediately. "The first DM he sent said: 'Wow, babe, you're hot.' I just laughed and knew then that this guy was thirsty."

She claimed that the DJ pursued her, sending flirtatious messages and private pictures and making plans for meetings. "He wanted to meet me from the first time we spoke, but I kept putting him off. When I suggested a restaurant, he said that wasn't private enough. He wanted to meet in a hotel."

They eventually met at a McDonald's in Arcadia. Makola said that if she had wanted to, they would have had sex that night because "I've never seen such a thirsty man".

Makola produced screen-munched DMs between herself and @Real BlackCoffee on Twitter, as well as texts from the same number that Sunday World has for the DJ.

In one, @RealBlackCoffee asks Makola what she's up to, and when she replies "In bed watchin tv, lazy Sunday" he responds "Can I join?"

Makola told Sunday World: "If he has such a perfect life at home, why would he send me such messages?"

She said the two of them went to Polokwane last month when Black Coffee was playing a gig. She claimed they drove with his friend and handler Amaru Da Costa in a Mercedes-Benz G-wagon. "Things got heated between us in the back seat, but he didn't seem bothered that Amaru was there and Amaru was cool. It's obvious they do this all the time."

Makola showed Sunday World a picture of herself in the courtyard of Fusion Hotel, where she said she shared a room with Black Coffee last month. She claims Da Costa took the picture, and the DJ is clearly visible in the background. "We didn't take pictures together because he was clearly being careful."

Da Costa, who handles Black Coffee's Soulistic Music business, laughed off the allegations. "I've never met her. Black Coffee doesn't drive a car like that and neither do I. In fact, I never travel with him. She's nuts, whoever she is."

Black Coffee, who is in Amsterdam, did not return calls, texts and e-mails from Sunday World to respond to these claims.