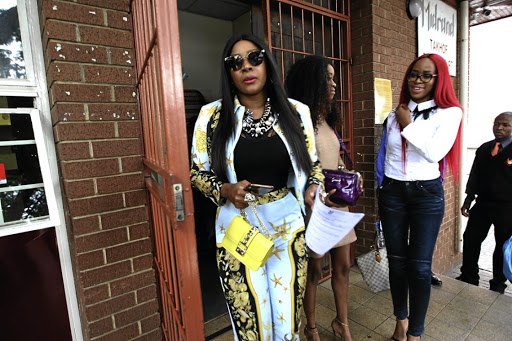 Uyanda Mbuli walks out of court while Joyce Molamu looks at her.
Image: SANDILE NDLOVU

The two were in the Midrand Magistrate's Court yesterday for sentencing after Molamu was found guilty on the crimen injuria and defamation charges.

The case was postponed to March 14 for mitigation.

"It's difficult to clear your name, especially to people who don't like you, and I think it's okay for certain people not to like me but for those who support me, believe me and emulate what I do and see me as a role model, I really have to step up and make sure they have the accurate information," Mbuli said.

The Uyanda: It's On star pressed charges against Molamu last year after she posted on Facebook calling her a "stupid b****" and accused her of trying to steal her businessman boyfriend King Maseko.

Mbuli rejects this statement, saying that she is only friends with Maseko and he owes her money she lent him.

Molamu also posted Mbuli's personal cellphone number, encouraging her followers to find Mbuli "a blesser" so that she could stop asking Maseko for money to fund her show.

Mbuli argued that this led to a deluge of phone calls and texts from unknown people and she was recently told by women at her salon that she was a subject of discussion in a taxi.

"They even said what was the purpose of my show [and] why am I sleeping with rich guys just to do a television show? That is not okay."

Mbuli said she was a businesswoman with a degree and was studying towards her MBA and that her lifestyle was not funded by blessers.

Molamu, who became known six years ago after reports that she was former minister of police Fikile Mbalula's lover, maintains that the verdict was not fair.

The former model said: "To date, Uyanda has failed to give proof of the money my fiance 'owes' her and the nature of their relationship. Instead, she's made claims of them being friends with information that is even grossly incorrect about him. So yes, it was unfair.

"However, a woman of my calibre moves on from such time-consuming things. I will not comment about old women anymore, I was taught to respect the elders."

Maradona has topped several charts across Africa.
Lifestyle
4 years ago
Next Article