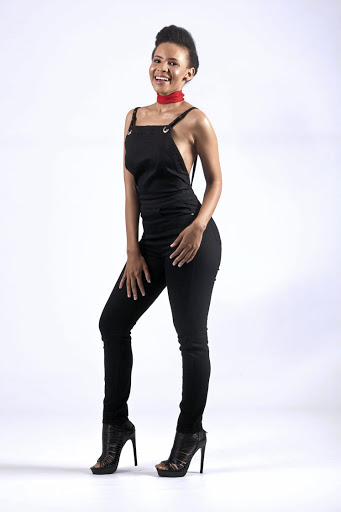 Charismatic, sexy and fearless are the three things that registered the first time I met actress Thulisile Phongolo two-and-a-half years ago.

It was at the Bon Hotel Riviera on Vaal in Vereeniging, south of Johannesburg, overlooking the striking Vaal River scenery.

After a gruelling 12-hour day of shooting a dozen stars for the annual Sowetan LIVE Mzansi's Sexiest calendar, she was
photographed last when everyone's energy had dropped. But, dressed in a tangerine, barely-there swimsuit, the then 21-year-old ingenue brought everyone back to life.

Phongolo will in May depart the role that made her a household name on Generations: The Legacy as Namhla Diale - the troubled daughter of ex-convict Lucy
Diale [Manaka Ranaka].

We have a quick chat over the telephone, in-between shooting her final scenes with the SABC1 soapie, reminiscing about her four-year journey with the show.

In comparison to the fresh-faced starlet I first encountered in 2015, the 24-year-old actress is less spiky and slightly more mature. "I've grown so much on the show, not only as an actress, but as a woman.

"Letoya [Makhene] and I were joking the other day that they raised me. That's very much true," she says. "It was time. Namhla had been there for a while and she had almost done everything. I think I've done my part; it's time to grow more and stop being viewed as a kid on a soapie.

"The show taught me that in a professional setting you need to be aware of your surroundings. As you grow up you start seeing that not everyone embraces growth of the next person. You have to know what's in your contract, knowing how you deserve to be treated and in knowing how you should treat others."

Throughout her tenure on the show, Phongolo's character has done it all and gotten into a lot of trouble. Who can forget when her big and luscious booty steamed up the internet when she went half-naked in one memorable and scorching scene.

For Phongolo, her favourite storyline has been somewhere between entertaining and educational.

She says the controversial storyline where her teenage character was involved in a romantic relationship with her high school teacher Mr Sokhulu [Batsile
Ramasodi] was impactful.

"That storyline highlighted the vulnerabilities that young people go through. I think I'm going to miss the fact that Namhla was challenged and in return that challenged me.

"I have never felt settled with my acting on the show because I've always felt like there is more I could do. It created a hunger that I appreciated," she says.

Phongolo is not wasting any time getting back into the game. She has already booked her next acting gig.

She will continue to pursue her new-found career as a music DJ under the moniker Thuli P. She adds that she is open to having a career as a radio DJ.

"What I love about the music
industry, as opposed to the acting world, is that the acting industry almost has a slow growth to it.

"Financially, with music I have seen so much progress . I mean I did DJing and in the first two months I could not believe where I was [financially]. It was so much easier to invest in things like property."

The Soweto-born beauty never had any formal acting training, but holds a bachelor's degree in strategic marketing communications from the University of
Johannesburg.

Before fame on Generations: The Legacy, she was a TV presenter on kids' show Craz-e. She also had a short acting stint on local drama series Tshisa.

"The suburb life for me came late. Growing up in Soweto taught me so much stuff . You get to relate to different backgrounds, and that can come in handy with acting."

Thuli Phongolo adds Gucci handbag worth over R56k to her collection

Actress and DJ Thuli Phongolo loves the finer things in life and recently added a Gucci handbag worth over R56‚500 to her closet.The star‚ popularly ...
Pic of The Day
4 years ago

Generations: The Legacy actress Thuli Phongolo has been island living.Phongolo is currently on vacation in Phuket, Thailand.She has been soaking up ...
Eye Candy
4 years ago

Generations: The Legacy actress Thuli Phongolo has been cooling off from the heat weave in a purple bikini that hugs her curves in all the right ...
Eye Candy
4 years ago
Next Article