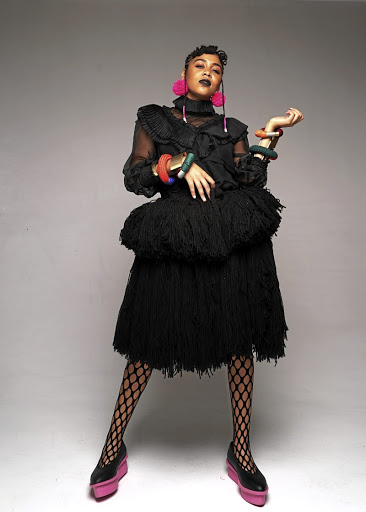 Sho Madjozi is a pioneering Tsonga rapper with a unique fashion style. / Supplied

Tsonga rapper Sho Madjozi has blazed into the limelight like a lightning bolt out of nowhere.

The 25-year-old supernova whose real name is Maya Wegerif has skyrocketed to become the name on everyone's lips lately.

Within a year that she's been rapping, heavyweights including Okmalumkoolkat, DJ Maphorisa and Ms Cosmo have already caught Sho Madjozi fever.

And the Limpopo-born musician has nabbed chart-topping collaborations with each of the aforementioned names. Internationally acclaimed house music maestro DJ Black Coffee is also a fan.

She opened for American superstar Travis Scott during his South African concert in June. Tomorrow night she will be one of the supporting acts at rapper Cassper Nyovest's Fills Up FNB.

"None of this was planned. I feel like I'm winging it because I'm a writer and not a performer," she confesses.

"People will always recognise me as Zanele Magwaza-Msibi's daughter before the actress," Gugu Gumede says with a tone of disappointment.
Entertainment
4 years ago

Motswako rapper Khuli Chana is the latest big name to team up with Sho Madjozi through his latest campaign with alcohol brand Absolut.

The end-result is a visually explosive piece of contemporary African art.

"Shooting this was intense. I gave it so much energy and force. I had to do the most, [and] because I'm the only woman. I didn't want it to be like 'she's just put there'."

Filmed in Ghana over a week, the short film captures a post-apocalyptic Africa with five superheroes. Sporting her signature kaleidoscope fashion and beaded braids, not forgetting her must-have style item xibelani [Tsonga skirt], Sho Madjozi slips into character as the ferocious Rain Queen.

The video, she says, leads to the One Source Live festival in Johannesburg on March 24 to showcase African creativity in music, fashion and art.

"I'm proud of the final product. The fact that I'm a superhero wearing a xibelani is very special not only for Tsonga girls, but black girls overall. I've started a whole new wave of black beauty of saying to girls that the way of being beautiful right now is beaded braids and it's African-inspired.

"That's something that gives me endless joy, when young and grown women say 'I want the Sho Madjozi style'. When Tsonga people say I've made them proud after years of being marginalised and mocked, it puts a smile on my face."

Things can get very confusing in showbiz when two stars share the same moniker. But for actress, dancer and singer Gugu Zulu, sharing a name with the ...
Entertainment
4 years ago

Sho Madjozi was born to a white father and black mother in the small village of Shirley, in Limpopo, the middle child of four siblings. Her family moved to Tanzania when she was 16 and she learned Swahili there.

"I had a very rural childhood. I was named after Maya Angelou. I guess my parents wanted me to read and write, so I did that. My first work of poetry was published at age 11," she says.

At 18, Sho Madjozi moved to Massachusetts, US, where she studied African Studies and Creative Writing. Next, she worked for a political campaign agency, before relocating to Senegal for a while.

"When I moved back to South Africa [in October last year] a lot of what I was doing was not working out. It was crazy because I was qualified for everything I wanted to do, even over-qualified sometimes. I was broke and desperate, then I thought I could write rap lyrics. So I sent a message to Okmalumkoolkat, asking to write for him. The rest is history."

After appearing in the music video for Okmalumkoolkat's smash hit Gqi! earlier this year, acclaimed TV producer Kutlwano Ditsele approached her on social media to audition for a role in his latest project.

She was cast as feisty university student and activist Tsakane Mboweni in the Mzansi Magic telenovela, Isithembiso.

Sho Madjozi plans to drop the music video for her hit single Dumi HiPhone soon. Her debut album, under the working title Limpopo Champion's League, is schedule for release in April. On her next single, Ishu, she will rap in Swahili.