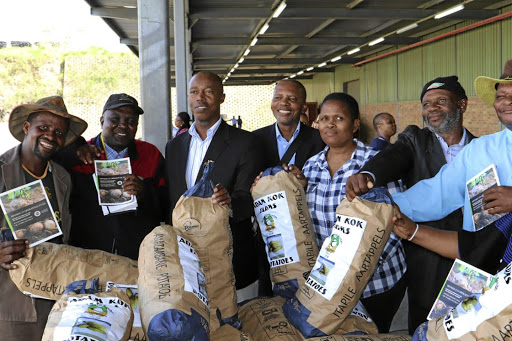 The farmers at OR Tambo District, which includes Mthatha, Mqanduli and Ngqeleni, have multiplied their production volumes since the start of the mentorship and development programme three years ago.

The Eastern Cape Development Corporation injected R3.5m into the initiative - R500,000 for each of the seven co-operatives, while the Ntinga OR Tambo Development Agency, Kei Fresh Produce Market and Potato SA focused on training and market support to ensure the farmers could deliver quality products.

The farmers were also trained in book-keeping with the help of the then department of agriculture, forestry and fisheries.

Mlungisi Ndobeni, one of the producers, said the seven cooperatives started growing potatoes on a subsistence basis without much knowledge of the standards required in the retail sector.

"Potato SA taught us how to produce quality potatoes. They assessed potatoes from each of the nine areas in OR Tambo District and seven of those areas passed the trials and were assisted in planting one hectare each. Then Eastern Cape Development Corporation contributed funding and that took us to 28 hectares each," Ndobeni said.

He said their ultimate goal is to become commercial farmers with agro-processing facilities for potato chips.

Ntinga spokesperson Zukile Ncapayi said the development agency's aim is to support farmers to produce properly graded produce that can be packaged and sold via formal distribution channels.

Ntinga also supplied a potato washing machine which grades potatoes according to size. - This story first appeared in the GCIS's Vuk'uzenzele

How to turn stale food into gourmet meals

There’ll be less salt in the processed foods South Africans eat from Thursday‚ but‚ the Heart and Stroke Foundation SA said‚ our eating habits still ...
News
6 years ago
Next Article