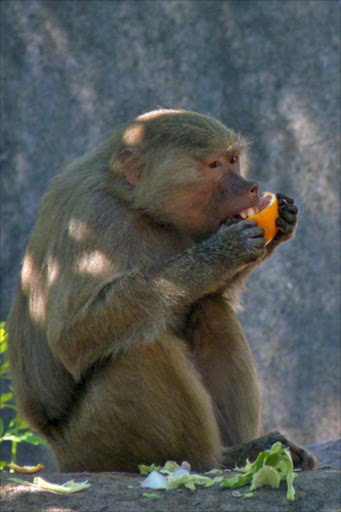 A TROOP of baboons has inadvertently discovered a new citrus cultivar for a farmer in the Western Cape.

Alwyn van der Merwe, production director of ALG Estates near Citrusdal 200km north of Cape Town, said yesterday the new fruit has proved to be not only to be sweeter than normal oranges, but will also lengthen the season by at least three weeks.

"Year after year the farm has been struck by a troop of baboons which descended from the mountains," Van der Merwe said.

"The troop always selected one tree among thousands of trees in one of our orchards and devoured all the fruit before our season really got going.

"At closer inspection we discovered that the brix (sweetness grade) of this particular minneola, a soft citrus variety, was much higher than the rest of the orchard and that it started bearing fruit at least three weeks earlier than expected."

The farmers then set about grafting some shoots of this tree onto standard root stock and passed it on the Citrus Growers Association at Uitenhage where the trees are now being multiplied in greenhouse tunnels.

"This process takes two years and as soon as we get the clearance from the association the trees will then be tested in real orchards all over the country for a period of four years before it is officially registered," Van der Merwe said.

The estate boasts the longest citrus season in the country - 10 months - and aims to produce citrus all year round within the next four years.

"We were lucky that the baboons' acute sense of smell led them to this particular tree. It was a case of a spontaneous mutation in the orchard, which would have gone unnoticed were it not for the baboons."

The estate is known in the agricultural world for its innovation and contribution to the industry.