In defence of Motsepe for spending R100m on Barca 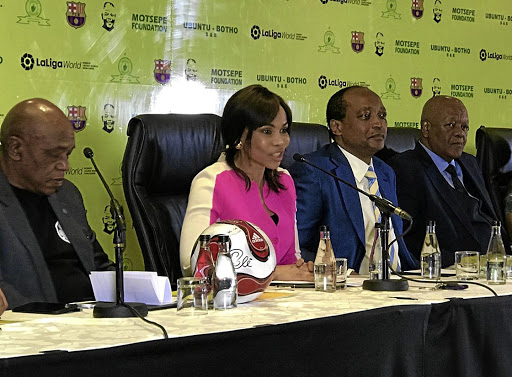 I've noticed that mining magnate Patrice Motsepe has come under fire from some quarters for paying ?7-million (R105-million) to bring Spanish giants Barcelona to play a friendly against his team Mamelodi Sundowns at FNB Stadium on Wednesday.

From what I can pick up on social networks, some believe no one in this country, with its economic challenges, should be spending such a lot of money even if it is for former president Nelson Mandela's Centenary celebrations.

For those struggling to make ends meet, it's a fair argument and I understand where they are coming from when they
say he should rather be donating this money to charities rather than enrich a club, Barcelona, that's already rich in any case.

Well, it may just be a friendly and even for Mandela, I also struggle to see how the country that has previously hosted a World Cup can benefit from having Barcelona on our shores. The big stars have been here before.

But then again, the same mining mogul, through his Motsepe Foundation, has continued to give back to the country in many ways, hence I find the accusation odd and uncalled for.

Barcelona have undertaken to bring their best stars to South Africa to play against Mamelodi Sundowns in the now-confirmed friendly match at FNB ...
Sport
4 years ago

On the same football front, just this week, he renewed the sponsorship with the South African Football Association's ABC Motsepe League, injecting R40-million more than he did in the previous deal in 2014, Motsepe has said.

The foundation has also committed R117-million over 10 years towards the Kay Motsepe schools football and netball competitions.

I don't claim to have a record of what the foundation has done in other fields, but just a quick visit to their website will give you some indication of its work, including educating the needy.

In terms of bursaries, it's noted that the foundation has spent R150-million on 1850 academically deserving students.

"R30-million was committed from 2014 to 2018 to expose gifted African students and entrepreneurs to global institutions of learning."

As much as Motsepe may or may not be wasting money on the friendly, you also can't ignore his charitable work.

So, judge him fairly.

With tickets flying off the shelves‚ and an early kickoff‚ organisers are stepping up security for FNB Stadium for Wednesday’s friendly between ...
Sport
4 years ago
Next Article