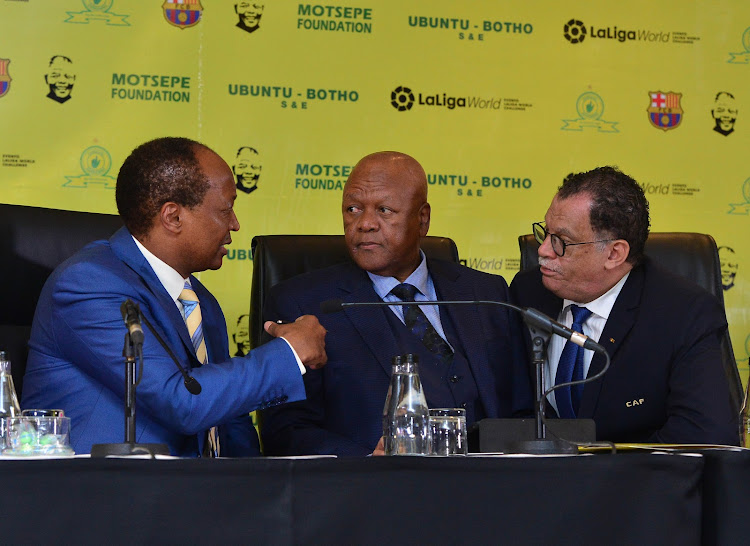 With tickets flying off the shelves‚ and an early kickoff‚ organisers are stepping up security for FNB Stadium for Wednesday’s friendly between Mamelodi Sundowns and Barcelona.

A 6.15pm kickoff on a working day has raised fears of congestion on roads leading to FNB in Johanneburg's notorious rush hour as ticketholders finish work and rush for the stadium.

There are concerns of crushes getting into the stadium should too many fans arrive at the same time within the hour before kickoff.

Downs president Patrice Motsepe urged fans to arrive early and asked businesses to allow employees with tickets out at 3pm.

Sundowns CEO Sizwe Nzimande said channeling of supporters into the stadium will be given a high priority.

He said Motsepe had approved extra spending on additional security to ensure that an event that will attract international attention runs without a hitch.

“Fortunately we are working at a stadium that has got a lot of experience with major events. FNB Stadium has got the design capability and the capacity and the competence to handle this type of event‚” Nzimande said.

“But we have been involved in a series of ESPC (event safety planning committee) meetings – about three already.

“What we’ve looked at primarily is the [Soweto] derby‚ and other events that they’ve had‚ and we’ve analysed and looked at the shortcomings of those events to see how we improve.

“What has also been done is that‚ with the blessing of Mr Motsepe and Dr Precious Moloi-Motsepe (Motsepe's wife and the head of the Motsepe Family Foundation)‚ we have invested a bit more to ensure that there is a higher level of safety‚ so that the security component is a bit better.

“And we are starting the security component far out in terms of the searches‚ the guiding and the funneling.

“We are having more security than normal to ensure that we are able to manage people and reduce bottlenecks.

“It won’t just be a normal funneling‚ with one or two security or ushers standing there. We are going to have fencing and loud hailers so that people are directed and split among the different gates.

“Inside the stadium we’ve got five categories in terms of our tickets.”

The Sundowns-Barcelona game had to kick off at 6.15pm due to the insistence of Uefa‚ who Barca fall under‚ that it did not clash with Wednesday night's Uefa Europa League final between Olympique Marseille and Atletico Madrid‚ which kicks off at 8.45pm.

Tickets for the friendly between the newly-crowned Absa Premiership and La Liga champions were selling at 216 per minute‚ according to the organisers on Thursday.

Nzimande said a train was being planned from Bosman Street Station in Pretoria‚ via Tembisa‚ to Nasrec‚ the purpose of which is to reduce individual car transport.

The much-talked about friendly match between Mamelodi Sundowns and Barcelona was announced as being officially going ahead.
Sport
4 years ago

Barcelona have undertaken to bring their best stars to South Africa to play against Mamelodi Sundowns in the now-confirmed friendly match at FNB ...
Sport
4 years ago

South Africans showed an amazing appetite for the marquee international club friendly between Mamelodi Sundowns and FC Barcelona after it emerged on ...
Sport
4 years ago
Next Article