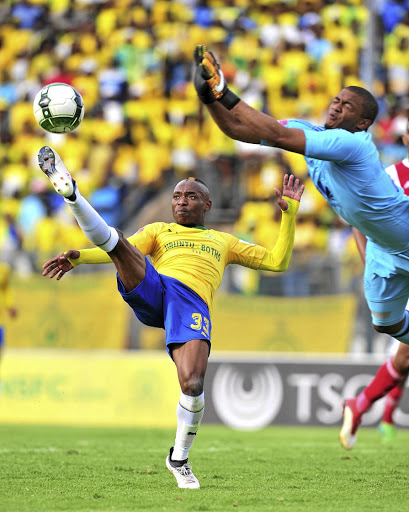 Sundowns' Khama Biliat, left, is apparently a target of various clubs in SA and overseas. The Zimbabwean international becomes a free agent on May 30.
Image: Samuel Shivambu/BackpagePix

But Mamelodi Sundowns forward has committed himself to finishing the season with the Brazilians, the new Absa Premiership champions, on a good note, without revealing much about his next destination.

Billiat's new agent Michael Ngobeni, who took over managing the player a few months ago from Siya Loyilane, told Sunday World yesterday that Billiat wants to remain focused on the job at hand rather than the fact that he's on his way out.

"Everyone wants him and the whole world knows he's going to be free [by June 30]," Ngobeni said. "But everyone has to wait until he finishes the season. Khama still has a contract with the club even though he's going to be free, so there's no reason why we should rush."

Billiat, 27, can afford to wait even though his contract expires in less than one month.

There are a host of clubs who want to sign him, but it appears that he would remain in the PSL with Orlando Pirates, Kaizer Chiefs and Bidvest Wits apparently the frontrunners for his signature.

SuperSport United, too, are in the picture.

He's also got a few options overseas with Qarabag of Azerbaijan and Sweden's Djurgadens chasing after him.

The 2015/16 PSL Footballer of the Season hasn't played as much as he would have liked this season owing to injuries along the way, but he still managed to score eight goals and contributed six assists in 16 Absa Premiership matches.

For now, though, the forward is enjoying his last days as a Sundowns player.

After all, he did mention that he doesn't feel like he's in "prison" at the club.

Mamelodi Sundowns’ hopes of an emphatic start to their Caf Champions League campaign have been handed a blow with the absence of key striker Percy ...
Sport
3 years ago
Next Article