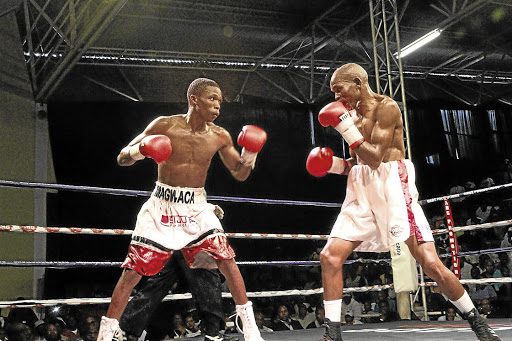 Cape Town-based Mzuvukile Magwaca is still walking on crutches after he was shot and robbed at his home in Khayelitsha last month. /SINO MAJANGAZA

I totally disagree with people who say at least Mzuvukile "Old Bones" Magwaca "was not killed" during the daring robbery at his home in Khayelitsha last month.

The young man is dead inside.

For starters, he is still not able to bend his knee. Magwaca is a professional boxer whose only source of income is through getting inside the square ring and fight.

The point I am making is that those thugs practically killed him.

This is how the drama unfolded: Magwaca had just parked his car at around 10pm, and while walking towards the door, he noticed that the burglar door was open. On entering, he was confronted by four people who were waking up his mother and brother before taking their phones. They then took Magwaca's phone before ordering him to unscrew the TV set mounted on the wall. While doing that, they fired shots at him. Let us help the SAPS nail the thugs who are still walking freely in our streets.

There have been other boxers who have been victims of crime.

He finally came back home in Mdantsane after the unbanning of political organisations in 1990. Makambi won the SA junior middleweight title in 1994 and added the IBO strap in 1998.

On a positive note, congratulations to all the nominees and the final winners of Boxing SA's awards in Port Elizabeth last month.