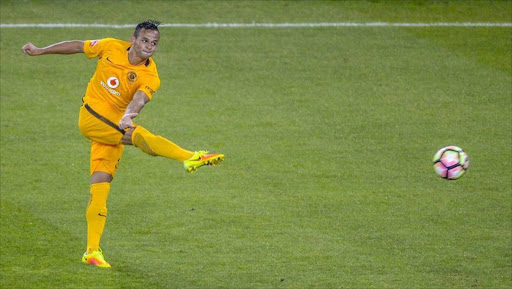 The Bafana Bafana number one goalkeeper was once again outstanding in goal for Amakhosi in front of a capacity crowd of 12 000.

Not only did Khune make numerous saves, but he also saved a penalty from Evans Rusike in the closing stages.

Chiefs striker Gustavo Paez also made his presence felt with a brace to earn Amakhosi maximum points. Credit, too, to defender Lorenzo Gordinho who made some impressive defensive stops.

Khune's heroics earned him the man of the match award for the third consecutive time after he picked up the same accolades in their 2-0 win over Cape Town City and 1-1 draw against Bidvest Wits in their last two matches.

Chiefs started well and deservedly took the lead through Paez with 14 minutes gone.

Siphiwe Tshabalala had played Bhongolethu Jayiya through on goal, but Maritzburg United keeper Richard Ofori blocked Jayiya's attempt. Paez, though, was lurking around and with Ofori failing to hold on to the ball, the nippy striker capitalised.

Maritzburg, however, were no pushovers and fought back gallantly in search of an equaliser.

It set up a Maritzburg versus Khune situation for the rest of the match, and he managed to cap the evening by saving Rusike's spotkick after Paez had added his second goal.

Elsewhere last night, BidVest Wits' woes continued as they were hammered 3-0 by AmaZulu in Durban.

There was surprise win for Baroka as they stunned Bloemfontein Celtic 2-0 away, while Platinum Stars are also searching for their first win of what has been a trying season.

Dikwena lost for a fourth time this season as Golden Arrows emerged with a 1-0 win at Royal Bafokeng Stadium.