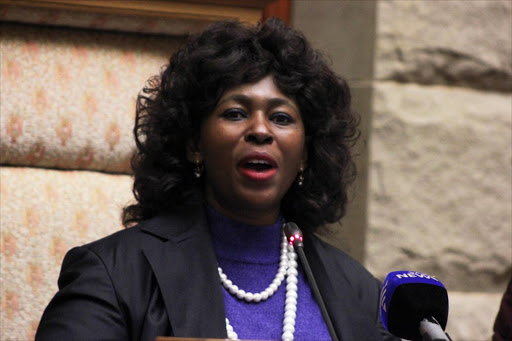 MP Makhosi Khoza is quitting the ANC‚ she announced on Thursday.

Speaking at the Liliesleaf Farm in Rivonia‚ Johannesburg‚ Khoza gave an emotional speech.

“We should fight for the restoration of our dignity. This is no longer the ANC that I know‚ this ANC is alien and corrupt‚” she said.

“I want to free myself from the ugly‚ nasty‚ self-serving‚ factional and unprincipled contestation for positions (taking place ahead of the December elective conference).

“I have reached the conclusion that the ANC has been hijacked by these aliens.”

Khoza said she was not joining the DA‚ as speculated‚ but was supporting an anti-corruption‚ faith-based movement.

“I want South Africans to know there are many good comrades within the ANC ... who cannot come out in the open for fear of being persecuted.

“I’m asking for people of all racial groups and classes to join the crusade to rid South Africa and the African continent of corruption.”

Khoza‚ who has spoken out against corruption‚ has riled the party authorities with her public calls for President Jacob Zuma to resign.

The ANC’s KwaZulu-Natal provincial leadership recently brought disciplinary charges against Khoza after she openly stated that she would back a motion of no confidence aimed at ousting the president.