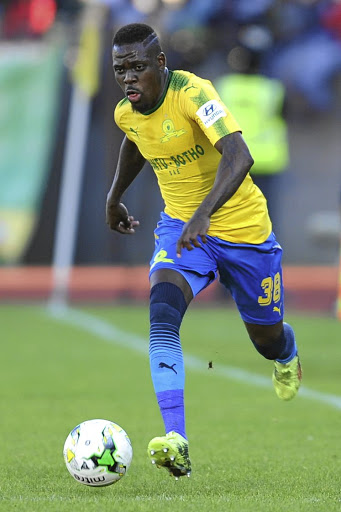 Mamelodi Sundowns star defender Siyabonga Zulu has been fired by his club after missing his disciplinary hearing and going AWOL.

To compound his headache, his dismissal has been captured by reality TV show No Excuse Pay Papgeld camera crew, who had visited his club this month looking for him to answer for his maintenance squabbles with his baby mama.

To their shock, the camera crew was informed by the club's spokesman Thulani Thuswa that the player had been booted from the club for a number of reasons, among them his off-field antics, which impacted on his performance.

Thuswa told the crew that the player also missed his disciplinary hearing in December where he was set to answer for failing to report for training.

The 25-year-old player joined Sundowns in January last year from Platinum Stars but had only been on the pitch three times.

He had also been evicted from the club's apartment in Kempton Park, which was assigned to him to help him resolve his non-attendance of training.

Thuswa told the camera crew of the reality show that Zulu was expected to come fetch his clearance following his dismissal.

These details emerged after Zulu's baby mama, a 32-year-old woman from Mondeor, south of Joburg, took the TV crew to his club's headquarters in Chloorkop to confront him about his alleged failure to pay papgeld for their child.

Troubled Mamelodi Sundowns defender Siyabonga Zulu has not reported for work for almost a month and has not set foot at the club's Chloorkop ...
Sport
3 years ago

The woman, according to the show's brief, had told the producers and presenter that the soccer player, whom she met on Instagram, had abandoned his fatherly responsibilities.

In the episode, which was aired on Moja Love on DStv's channel 157 last night, the woman said her relationship with Zulu was well until she fell pregnant in 2017 while he was still playing for Stars.

She said Zulu started changing and would cheat on her with numerous women and she forgave him on most occasions. However, she said things got worse when he finally joined his dream club last year.

"Things went wrong when I was eight months pregnant... he became distant," she said on the show.

She said Zulu later moved out of her apartment, which she was sharing with him, but still maintained contact through visits and would at times come to borrow her car.

She claimed Zulu also crashed her car, leaving her with a R50,000 debt to fix her Audi A5. She said upon arrival at Zulu's home in Soweto, she was accused by Zulu's mother of putting a spell on him and that she was only after his money.

Zulu's sister also refuted all her allegations, accusing her of destroying his soccer career by constantly showing up at his club to complain about him.

Zulu could not be reached for comment and did not respond to text messages sent to him.