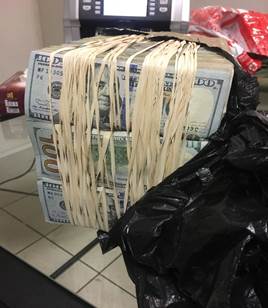 Bundles of dollars found in the hand luggage of a student who boarded a flight to Hong Kong
Image: SARS

South African Revenue Service (Sars) customs officers pounced on a student who boarded a flight at OR Tambo International Airport and found nearly R10-million worth of US dollars in her hand luggage.

The female student had boarded a flight to Hong Kong on Tuesday.

“The flight was due to leave when the officers intercepted the passenger on the flight. The passenger‚ a South African female student‚ who had boarded with two bags as hand luggage‚ was then alighted with her luggage‚” Sars said in a statement on Thursday.

“Initially‚ she denied having currency in her possession‚ but after further questioning‚ she admitted that she had a substantial amount of money in her back pack.

“Officers led her to the customs search area‚ where she was placed in an interview room and requested to complete a traveller card. The passenger verbally stated that she had 650‚000 United States dollars in her bag. She admitted that she was not the owner of the currency‚ nor could she supply any proof of ownership.”

Customs registered a criminal case of smuggling currency and failure to declare. The student was expected to appear in court on Thursday.

The cash was packed in 50- and 100-dollar bundles in a plastic bag.

At least 19 people aboard an Emirates flight from Dubai to New York were confirmed ill when the aircraft landed on Wednesday at John F. Kennedy ...
News
3 years ago
Next Article