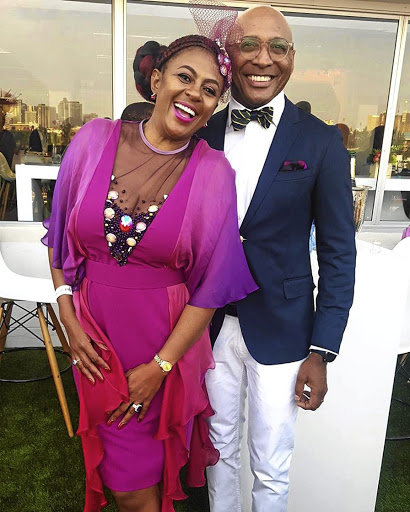 Basetsana Kumalo and her husband Romeo.

The National Prosecution Authority (NPA) South Gauteng will decide on the fate of author and social media big cheese Jackie Phamotse in due course.

This was confirmed by NPA South Gauteng Spokeswoman Phindi Mjonondwane.

"I can confirm that the police have referred the matter to us for a decision whether to prosecute. However, the prosecutor who is handling the case referred the matter back to the police for further investigation," he said. Phamotse found her self on the wrong side of the law after businesswoman Basetsana Kumalo opened cases of defamation and crimine injuria against her at the Midrand police station
last week.

This after a Twitter storm that was ignited by Phamotse's controversial tweet on June 5 about a TV mogul and her hubby .

Even though Phamotse did not mention Kumalo by name, Twitter users responded and identified her as the faceless "female TV mogul" and her husband Romeo Kumalo.

In her tweet, the author of Bare: The Blessers Game, The Breeding Of An Underdog, claimed that she overheard a conversation between one of her "girls" and a "TV mogul".

The couple is taking legal action against an author who allegedly started a social media rumour that they appeared in a gay sex tape.
Entertainment
4 years ago

She said the "TV mogul" was pleading with the woman not to leak a video of her husband in a compromising position.

Two weeks after the furore, Kumalo opened a case and went public for the first time about the incident, which she said put a strain on her family.

Kumalo - who owns Top Billing's production house Tswelopele and has shares in Connect TV, which produces top shows such as Our Perfect Wedding, Date My Family and Utatakho, referred all queries to her legal consultant Emma Sadleir.

Sadleir said cases of crimen injuria and defamation were opened at the Midrand police station. She also said the couple obtained a protection order against Phamotse at the Randburg Magistrate's Court.

The legal eagle also cited another case in which two public figures were involved in a
cat-fight that led to the successful prosecution of one.

"In the [TV star] Uyanda Mbuli case, which was also a criminal charge of crimen injuria, [socialite] Joyce Molamu was sentenced to a R6000 fine."

Author Jackie Phamotse has turned to her legal team after power couple Basetsana and Romeo Kumalo laid criminal charges against her.
News
4 years ago
Next Article