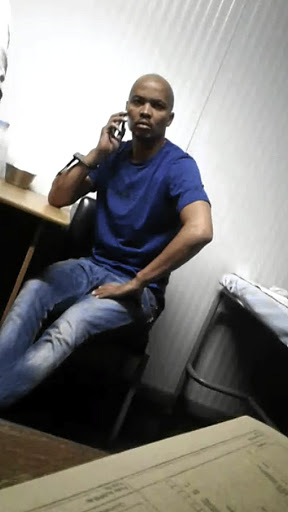 SuperSport soccer analyst Siyabonga Solace Nkosi, pictured, missed scoring his first criminal record by a whisker after he roughed up a female cop, calling her a dog and a slut at Sandton police station in March.

"The case was opened at Sandton police for investigation so you can check with them," he said.

Sandton police spokesman Granville Meyer said the former Kaizer Chiefs and Bafana Bafana midfield star was charged with drunk driving and appeared in the Randburg Magistrate's Court the following day but the case was closed and filed.

These details emerged after the video of the shocking incident was circulated on social media platforms on Friday night.

In the video, Nkosi, who is clad in a blue T-shirt, a pair of blue jeans and orange and black takkies, is seen trying to call someone on the phone while a female police officer is sitting on a chair writing down a statement. Nkosi can be heard asking a police officer to remove the cuffs off his hands.

"Look, look what you did here," he said, showing her a hand that appears to have been scratched by the cuffs. "For whatever reason whatever case he has whatever, for some f***ing."

He then redirected his rant against a male cop who appeared in front of him.

"Wena ... I don't know who are you for whatever reason. Wena, you think you are bigger than the law," he said, while trying to make another phone call.

In another clip, Nkosi wags his finger at another metro cop and accuses them of thinking they are bigger than the law.

He then violently stands and blitzes towards a female cop who was filming his rant and hit the cellphone out off her hand.

The female cop could be heard in the background accusing him of assault.

Just when we are dealing with so much, Faith,Babes,Mampitsa....

Can this year end already😲 pic.twitter.com/5eYOEKIsRU