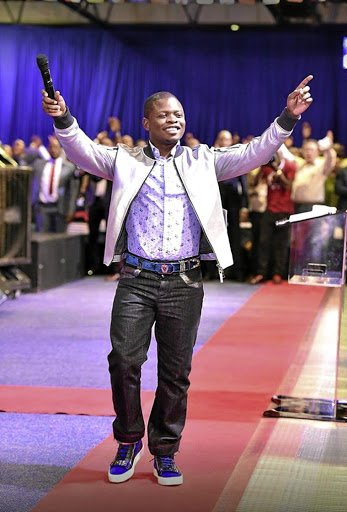 The leader of Enlightened Christian Gathering (ECG) Prophet Shepherd Bushiri handed himself to police last night after a week of drama in which his pastors and guards chased away police from his Pretoria church on Thursday.

The detectives had visited the church building to obtain a warning statement from Bushiri in connection with a case of crimen injuria brought against him by a Rustenburg businesswoman.

Lebogang Mpane pressed a criminal charge against the man of the cloth last month, saying he called her a witch live on TV in one of his prophetic sermons.

On arrival at the church building, the officers were told that Bushiri was out of the country, but they suspected that the pastors and security guards were hiding the prophet. A scuffle broke out.

According to the officers, the scuffle between the two groups was defused after Bushiri's lawyer, Ntsako Baloyi, was called to the scene to speak to the officers.

Woman sues Bushiri over clip on YouTube
News
3 years ago

However, Bushiri and Baloyi visited the Pretoria West police last night in a dramatic fashion to make a statement .

Sunday World saw a video of the drama in which Bushiri was wearing a white T-shirt walking into the station.

Baloyi confirmed that he and the man of the cloth, accompanied by an entourage of guards and other church elders, went to the police station to make representations.

The pushing and shoving drama between officers and Bushiri's security guards earlier in the week, according to police sources, degenerated to an extent that the lawmen threatened to collapse a church service which was in session.

"We asked them to give us someone that we can talk to since they said the prophet was out of the country. But they started insulting us and telling us to leave the church and the man of God alone.

"We left the church to go call for back-up. But before we could reach the station, Bushiri's lawyer was on our tail. He followed us to the police station," said one officer.

Pretoria West police station commander Michelle Toohey confirmed that officers were dispatched to the church to pick up the pastor, but she said she could not disclose what had happened at the church.

"We do have intentions to bring him to the station for questioning," she said.

She was not available last night to confirm the dramatic visit by the prophet.

Sunday World understands that the police visit to the church happened after Mpane's mother, Loate, who is also a police officer, went to the station to inquire about the progress of the case.

It is understood that Loate elevated the matter to a cluster commander who instructed the station cops to pay Bushiri a visit.

Loate confirmed that she visited the station and reported the matter to the commander, saying that there was little action on the case.