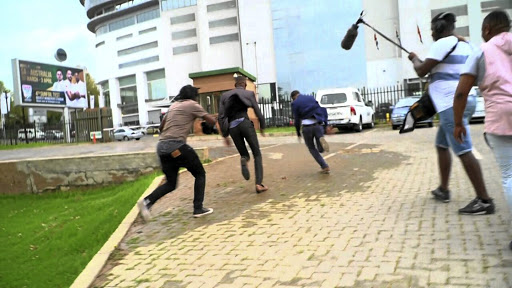 Karabo Letlhatlha runs away from his baby mama and the 'No Excuse: Pay Your Papgeld' crew.
Image: Supplied

CNBC Africa TV presenter Karabo Letlhatlha ran for his life when a TV crew and his baby mama cornered him about the maintenance for his six-year-old son.

The woman, who cannot be identified for legal reasons, wrote to DStv's new show on the Moja Love channel, No Excuses: Pay Your Papgeld, claiming that Letlhatlha was a deadbeat dad.

The lady, who works for a media company in Joburg, claimed that the TV presenter had failed to pay maintenance for three years despite his R40000-a-month salary.

The shows producers lured Letlhatlha to a hotel in Sandton under the pretext that he was to be interviewed for a lucrative job as a business correspondent for a new radio station. The woman said they applied the tactic because Letlhatlha was full of tricks and would play hide-and-seek whenever he was reminded of his responsibilities as a father. She said he ran for his life when he realised that there was no job interview and that he was facing a confrontation about papgeld instead.

Sunday World understands that construction workers were in stitches as they saw two men in suits running, including the show's presenter, Moss Makwati, with the TV crew not far behind.

"The workers even asked us who had not paid maintenance," said the woman.

She said Letlhatlha surrendered when he got tired.

"He then agreed to sit down to discuss the matter and he said he was not paying maintenance because I was refusing him access to his child." 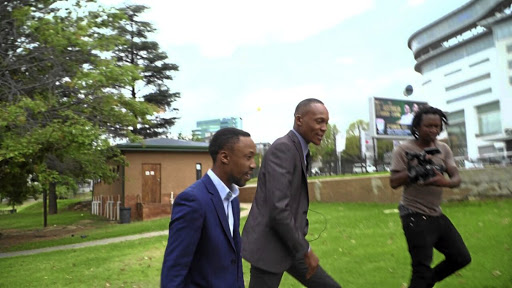 Karabo Letlhatlha walks alongside 'No Excuses: Pay Your Papgeld' presenter Moss Makwati after he caught up with Karabo in a race to establish if he really is the dad of his baby mama's child, as she claims.
Image: Supplied

Letlhatlha, according to the episode seen by Sunday World, said he was reluctant to foot the bill for the child because he was not sure that he was the father.

"He said he wants us to do a paternity test to confirm that he was the father of the child. I was startled because, firstly, he said I was denying him access to his child and later he said he might not be the father."

The TV presenter's demand for paternity tests is also covered in the episode scheduled to be flighted on April 21.

When asked for comment this week, Letlhatlha said he was too busy to entertain questions on the papgeld matter.

According to footage of the episode, Letlhatlha requested a meeting between his baby mama's parents and his parents during the Easter weekend. However, he did not commit on TV about payment.

"He said he is not going to pay anything until the meeting happens," said the baby mama.

In the TV interview, she told the presenter how Letlhatlha outsmarted her in 2014 when she approached the Johannesburg family court. She said court maintenance officers assessed that Letlhatlha could afford to pay an amount of R4000 monthly, but when they met for a second hearing, she was stunned by Letlhatlha's trick.

The show claimed its first casualty in its first episode, Pule Hlatshwayo, a scriptwriter on Tjovitjo.
Lifestyle
4 years ago

She nearly collapsed with shock as he rocked up driving a brand new car armed with a bank statement that showed he had a monthly commitment of R8000 for the car and R2000 for petrol.

The woman told Sunday World that she abandoned the court process because she realised that she was going to get a raw deal - a paltry R1 000 monthly maintenance.

According to footage, Letlhatlha contributed R600 in 2016 and R2000 in 2017 despite the staggering monthly expenses of R10520 for the child's school fees, uniform, child-minder and food.

- No Excuses: Pay Your Papgeld airs every Wednesday at 7.30pm and repeats every Saturday at 8pm on DStv Channel 157.