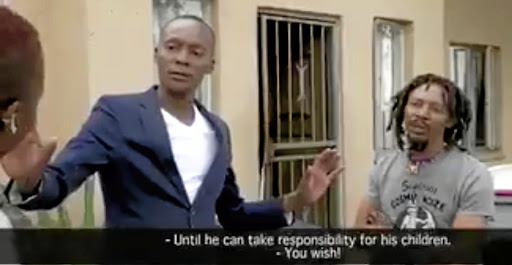 A few months after parliament gazetted the amendments to the Maintenance Act to allow for maintenance defaulters to be blacklisted, Moja Love has introduced a programme meant to expose fathers who do not play their part in raising their kids .

Titled No Excuse, Pay Papgeld, the reality show was launched on Valentine's Day on Channel 157.

Presented by newcomer Moss Makwati, the show has seen women hunting down their baby daddies live on TV.

Jacqui Setai, the head of the channel owned by Siyaya TV, said: "This investigative social reality show will entertain viewers with hardcore factual content informing, educating and reminding people that every child has the right to basic necessities such as food, shelter, clothing, medical care and schooling."

The show claimed its first casualty in its first episode, Pule Hlatshwayo, a scriptwriter on new SABC TV series Tjovitjo.

Hlatshwayo was hauled before the show by his baby mama, a former Yizo Yizo actress who had problems getting him to pay maintenance towards their five children.

She said Hlatshwayo had failed to support his kids for the past four years, despite obtaining three maintenance orders against him.

The court had ordered Hlatshwayo to pay R2500 a month but the baby mama said he only paid once. She told the show and this paper that she was now owed R120 000.

The actress claimed that Hlatshwayo was leading a lavish lifestyle.

"He is currently a scriptwriter of Tjovitjo but you won't believe me when I say to you he hasn't paid a cent for his kids. That's how cruel he is."

Hlatshwayo conceded during the interview that he had not seen his kids for two years but said he was not paying because the mom refused to allow their kids to be part of his life.