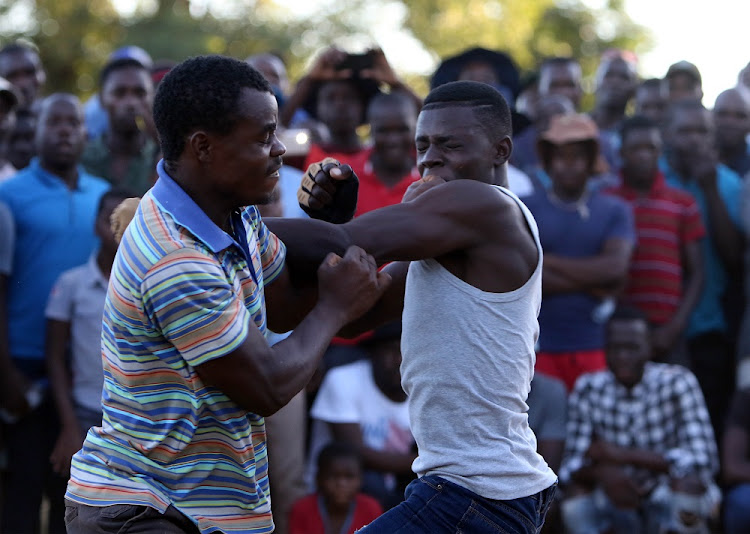 FILE PICTURE: This picture is only being used for illustration purpose. January, 07 , 2018. Fighters during the Venda traditional Musangwe fist fight, which is staged annually at Tshifudi village outside Thohoyandou.
Image: ANTONIO MUCHAVE.

The Venda community, a local chief and a musangwe (bare-knuckle fighting) organiser have filed a R20-million lawsuit against MTV's Comedy Central, Viacom and MultiChoice over comedian Daniel Tosh's controversial remarks about their fights aired four years ago.

This comes after a video of one of the musangwe fights went viral in 2014 after it was featured on the comedy show Tosh.O. The clip depicted one of the fighters being resuscitated by a local healer through a massage of his manhood to help him gain consciousness.

However, it was Tosh's controversial remarks that musangwe was a popular sport in Africa used to pass time during lunch because there was no food, and his insinuations that the fighters appeared to be suffering from malaria and HIV/Aids, that irked the Venda community.

"It's Africa, where tribal boxing is just how they pass the time at lunch, since there's no food . They must be checking him for blood diamonds . Thanks for the filthy water, now he's got brain damage and malaria . No wonder the Aids is doing well over there," Tosh is accused of having said on his weekly show.

A documentary maker has gone to court to stop a sacred vhaVenda custom from being broadcast on television in a format that depicts African people as ...
News
3 years ago

These remarks were labelled by musangwe producer David Phume and Chief Lavhelesani Ronald Makuya as gravely offensive and they said it had ridiculed, humiliated, degraded and belittled the customs and traditions held dear by the Venda community.

According to court papers filed by Phume, owner of Penthouse Motion Pictures, at the North Gauteng High Court in Pretoria on December 15, the airing of the clip by MTV's Comedy Central also infringed on the production company's copyrights as it had not sought permission from him to broadcast the fight.

In the papers, Phume said the broadcast of the clip and remarks by the presenter contended, implied, insinuated and represented that their customs and traditions were dishonourable, disreputable and that the Venda people were of low character.

According to the court application, Phume and the Venda community have in turn asked for an order demanding MTV to remove the "offending material" from all its broadcast television programmes, including social media.

The producer said the Venda had since withdrawn their permission to allow him to record and broadcast the musangwe fights for his TV programme.

According to the papers, Penthouse Motion Pictures had signed a contract with Zallywood, the owner of Tshwane TV and GauTV, to supply the channel with content from musangwe fights for an amount of R3.5-million a year for a period of five years. The programme had aired a number of episodes on the channels and the show was presented by Muvhango actor Lesley Musina.

A court interdict stopped the project from going ahead.
Lifestyle
3 years ago

Phume further said that he had also created a special musangwe series targeted at the SABC and they were about to conclude an agreement in 2017.

Phume told Sunday World that both companies had been arrogant in dealing with the matter and MTV had in one of its correspondences said that it did not see anything wrong with the episode as the clip was covered on a comedy show.

He said MultiChoice indicated that it intended to oppose the matter in court.

MultiChoice spokeswoman Marietjie Groenewald said: "Any queries regarding this matter should be directed to Comedy Central Africa directly."

Comedy Central Africa said it was "aware of the filing of the court papers in relation to the Tosh.O clip. We are in the process of reviewing the court papers related to this matter and will follow the due legal process.

"Given the fact that this Tosh.O clip is part of a legal process, we are unable to comment further on the footage aside from confirming that we have been engaging with all parties involved including David Phume and the Venda leadership to find a resolution. We are committed to reach a resolution," said the channel.