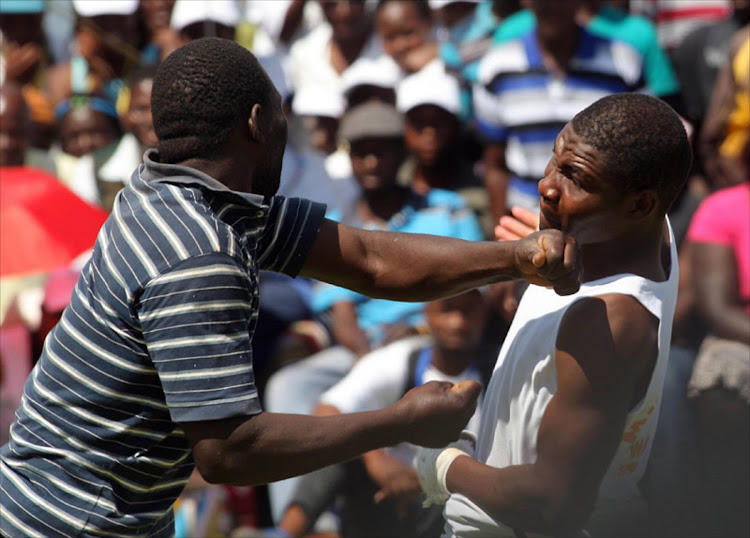 A documentary maker has gone to court to stop a sacred vhaVenda custom from being broadcast on television in a format that depicts African people as backward.

David Phume‚ the owner of Penthouse Media‚ filmed the custom of Musangwe‚ or bare-knuckle fist fighting‚ showing how a fighter who had been knocked unconscious was revived using Venda traditional methods in 2013.

In it‚ a traditional healer explains how he revived the fighter by reaching into his trouser front where he massaged his abdomen. Another man holds the injured fighter and a third pours water from a jug of water onto his head and face.

But it did not end there. The Tosh.O show‚ according to Phume‚ then made a racist attack on the Venda community and its customs and traditions in particular‚ and black Africans in general. (This publication has decided not to amplify the damage by showing the offensive clip.)

The sound from the original clip was muted and a presenter‚ in a “video breakdown”‚ analysed the footage and questioned the actions of the traditional healer.

The presenter said‚ “It’s Africa where tribal boxing is just how they pass the time at lunch‚ because there’s no food.” Other comments included: “Shaka Zulu‚ that will shave a couple of months off his 42-year lifespan”; “They must be checking him for blood diamonds”; “Thanks for the filthy water‚ now he’s got brain damage and malaria”; and “No wonder the AIDS is doing so well over there.”

Musangwe is reputed to have started in the late 1800s and is held annually every day between December 16 and January 1 in Tshifudi Village‚ when villages are pitted against one another.

No prizes are awarded and the fighters merely fight for personal pride and to secure bragging rights for their villages.

Phume said that to date‚ only one fighter had died in the tournament and that was in 1929.

He said the organisation granted him permission to record the fights on condition that commercialisation‚ broadcast and dissemination of the Musangwe films would be done in a manner which respected the sensitive nature of the sport‚ and the customs and traditions of the Vhembe community.

Following the screening of the Tosh.O clip‚ the organisation said Phume and his company were no longer welcome to film the events.

This forced Phume to contact his lawyers‚ Kisch IP‚ for advice.

“The clear implication of his comments is that our customs and traditions‚ and African people are backward‚ dishonourable‚ filthy‚ disreputable‚ of low character‚ that they trade in goods obtained by bloodshed and slavery and are deserving of the AIDS epidemic‚” Phume said in an application to the High Court in Pretoria.

Phume‚ his company‚ the Vhembe Traditional Entertainment Organisation‚ and Chief Lavhelesani Ntswethini Ronald Makuya have asked the high court to interdict and restrain Comedy Central and Multichoice from infringing their right to dignity and privacy.

Before launching legal proceedings‚ Phume’s lawyers wrote a letter asking Comedy Central to stop using the Penthouse film and pay R20m in damages for the “flagrant infringement of our client’s copyright”.

MTV Networks Africa‚ owner and distributor of Comedy Central in Africa‚ said in response that by placing the clip on its Facebook page‚ Penthouse Media ought to have expected others to criticise‚ comment on and review the content.

MTV Networks Africa and Multichoice have indicated that they will defend the action.

A man gets knocked out in Musangwe (an indigenous fight club) the marshals then attempt to save his life by performing the most daring CPR.