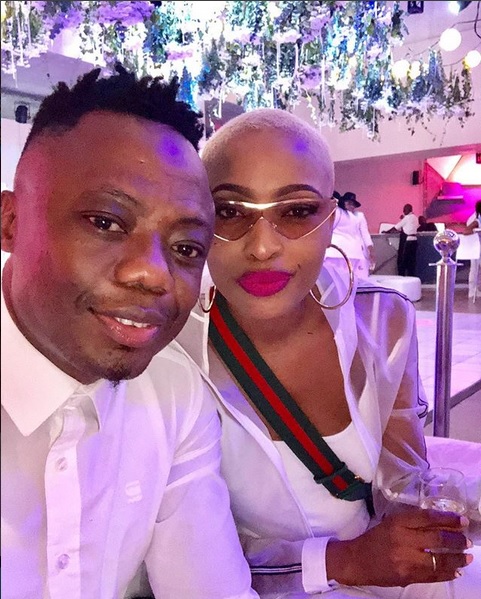 DJ Tira's wife Gugu Khati got major heat on social media for seemingly having a "bad attitude" at the Samas on Saturday night.

Gugu‚ along with the rest of Mzansi's celebs‚ piled into Sun City for the swanky awards ceremony which celebrates the hard work of the country's musicians.

During the awards ceremony‚ a video clip of Gugu giving hosts‚ Somizi Mhlongo‚ Dineo Ranaka and Mpho Popps a thumbs down for a joke they made about Mabala Noise went viral.

While some followers applauded her reaction‚ that quickly changed when she went on stage to accept an award on behalf of Mafikizolo.

The Twitter streets slammed Gugu for having a "bad attitude" because of her "facial expressions."

Shortly after the debacle‚ Mafikizolo's Nhlanhla Nciza and Theo Kgosinkwe addressed the claims through a video on social media.

Nhlanhla said that Gugu was very kind to accept the award on their behalf at the last minute and that her facial expressions were misunderstood.

"Gugu is an amazing and beautiful woman. She is a dear friend of mine and has been a part of the Mafikizolo family for years and last night Gugu was nervous about going on stage and people don't understand the way she speaks and some people took offence to it."

She added that Gugu was not being disrespectful to South Africans or Mafikizolo in any way.

DJ Tira also defended his wife‚ saying that she is a great person who doesn't like negativity.

"She didn't like the 'rest in peace Mabala Entertainment' joke. She is a great person who doesn't appreciate negative vibes. Must we be laughing at Mabala now that they not focusing on music?."