13 things you need to know about HIV self-testing 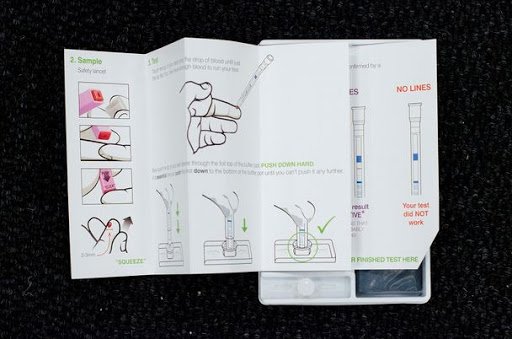 BioSURE HIV self-test is now available in South Africa at some Dischem branches‚ Spar stores and at some Pick n Pay supermarkets for people to test their status in the privacy of their homes.

TimesLIVE met its founder Brigitte Bard who flew from the UK to market the test.

Here are 13 things you need to know about the test:

1. The BioSURE test has been approved by European authorities and temporarily approved by WHO for self-testing‚ meaning it is easy enough for anyone to use correctly and understand

Squeamish people take heart as it only takes a tiny drop of blood‚ ten times less than that used in the tests by clinics. Also note‚ it is less painful to take blood on the side of your finger than the front.

Blood tests are far more sensitive than oral tests that test for HIV and therefore more trustworthy which is why blood is used.

Anova health staff member Riaan Norval who did the test at the media event said: “I am afraid of needles but I didn’t feel the prick“.

You don’t need to mix any chemicals with your blood to do the test. It has a bright pink lancet that helps you make a tiny finger prick for blood and then you put the test on top of the drop of blood.

5. There is a window period before using the test.

It tests for antibodies that your bodies makes against HIV so there is a window period of between 6 weeks to three months after infection while the body starts to fight the virus.

Most people’s bodies make antibodies against HIV within 6 weeks but some people take about three months to start fighting the virus.

The lancet that helps make the prick does not have anything sharp sticking out. It will kill any HIV blood inside‚ so the test can just be chucked in an ordinary rubbish bin.

The test comes with a plastic bag to put everything in.

It takes a maximum of fifteen minutes‚ but in most cases it works much quicker.

Two lines means a positive result. One line means you are HIV negative. No lines means the test didn’t work if a person made an error.

The recommended retail price is R158.

Bard says: “Not testing for HIV‚ doesn’t mean it is not HIV is there‚ it just means you didn’t know [your status].

“With HIV you can take a pill a day‚ you can have children‚ you can live a normal life.”

She said the test was easy to use and that BioSURE were “trying to generate a shift in mind-set change” making it easy and popular to test for HIV.

Self-testing is only one option. People can still test their status at pharmacies‚ in clinics and in doctor’s rooms?

Initially there was much reluctance about self-testing with pharmacies banned from selling them but this restriction has been lifted by the Pharmacy Council.

Activists argue women can learn if they are pregnant with a self-test and that is not good news for every mother so why prevent them from a HIV test.

It is not South African law that pre and post-test counselling have to take place‚ said Bard. The test has helpline numbers for people to get support.

There is a new self-testing initiative call STAR funded by Global fund and Unitaid that will hand out two-million self-test kits at workplaces and schools in coming months to improve South African’s testing rates. The initiative starts in Gauteng‚ KwaZulu-Natal and Mpumalanga provinces and will expand to the North West‚ Free State and Limpopo.

A HIV positive test whether done at home or with a nurse always requires a follow up lab test using different technology.

If you test positive‚ you need to see a doctor or nurse and have another test. If it says you are positive‚ then you start treatment. All HIV positive South Africans qualify for HIV treatment immediately.

13. How do I find an accredited self-testing test?

A European-approved HIV self-test will say CE and have the code ‘0086’ on it. Without this logo and numbers‚ it is not approved for accurate home use.