Curvy is the new lovely this summer 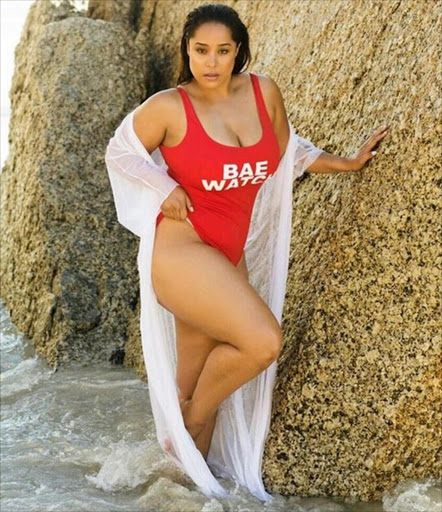 At 1.7m tall and weighing a healthy 93kg, Charnelle Paulse is a sought-after "plus size" model.

Click through Spree.com and she lights up its pages, catch her on Instagram where her dangerous curves are positively lit.

Toned, curvy and healthy - she has become the envy of many women and has gained a considerable amount of male adoration too.

The clothes she models are suited to most women in South Africa, who don't consider themselves fat but deliciously padded.

Paulse has also made history as one of the first "plus size" girls to walk the Mercedes-Benz Fashion Week Runway last week.

The 32-year-old was one of six curvy models to wear Ruff Tung's designs at the show.

"I always wanted to be a model but I felt that I did not have the 'perfect' model look or body type," she said.

Born and bred in Cape Town, she was involved in ballet, gymnastics and dance, including modern, jazz, contemporary and African and hip-hop from a very young age.

"For as long as I can remember, being a model was always something I wanted to become. But, growing up, my body showed me that I don't have the right build for it. I was always a little heavier than what a 'normal' model should look like.

"I would go on extreme diets month after month, year after year, hoping that one day I would wake up with the 'perfect' body."

She also pursued acting and dance while living in Bloemfontein with her hubby, professional footballer Nathan Paulse.

She took part in a play called Reitz4, which became popular among the students at the University of the Free State.

But all this changed when she came across an article talking about plus size modelling and she immediately decided to get in touch with the modelling agencies.

Needless to say, three out of the five listed agencies wanted to sign her immediately.

She signed with Y-Models (now known as Contact Models) and worked with them for two years before moving to Ice Genetics.

Her first paying job as a model was a six-page spread for Your Baby magazine.

Her second job,was doing a shoot in Durban for JET Stores and she became the face for their plus size brand, Donatella - the biggest plus size brand in the country.

Today, she is one of the faces for Australian swimwear brand Lilly&Lime, the first plus-size model to be on the cover of Foschini Club magazine 2016 and she was one of the influencers and faces for local artist Jimmy Nevis's new clothing brand, York Yard.

"Looking back I can say I've been the pioneer of the curve industry in South Africa.

"There was no one to look up to or a role model that I aspired to be like. In fact, when pursing this career a lot of family and friends would ask me why I would pursue a career like this... but I knew what I was destined for.

"I've now helped change the hearts and mindsets of what people thought fashion, beauty and humanity is all about, and it's only the beginning. My career has only just begun. It's been hard to break through the stereotype of what a 'real' model should be or look like but I can proudly say South Africa has finally turned its corner and starting to change the perception of that."

"You have to have a real passion for it and know that everything will not always be glamorous. Secondly, patience and hard work is what will get you to the top. Believe in yourself, stick to your guns and flourish," she said.

Paulse said that although she's a big girl, she eats well and keeps active but won't deny herself the pleasures of life either.

"I get my confidence through my constant personal development and belief in myself that I am enough. I want to continue breaking barriers about body types and body shaming.

"I train three to four times a week and always have a protein and veg as part of my meals. I am not completely strict when it comes to my diet, if I feel like having a burger then I'll have it, I would just train harder and up the cardio the next day with my trainer," she said.

l The black, bold and bootiful Celia Ncalane from Sunninghill in Joburg has her face plastered on posters all over SA - from billboards to magazines.

"I have been in this industry for seven years, it has shown me the good, bad and the ugly. But I have loved every minute of it. God has been a huge guide on this journey that I am on and he will continue to be there all the way," she said.

She was also once the face of Spree, Queenspark, Edgars and Penny C and became the face of Donna (a retailer specialising in plus size fashion) in 2010.

Ncalane, who proudly flaunts her size 40 to 42, said that she wasn't always the most confident girl.

"In high school I had a very low self-esteem. I was one of the first girls to wear a bra in my class so I always knew that I was different. But now I am thankful for my big hips, my big breasts and my big bum. I stopped comparing myself to other people and through that I found sheer happiness. Affirming myself is what keeps me grounded and keeps me going," she said.

The 34-year-old said she has her mom to thank for more than her looks and build but also her classic style.

"Growing up I always looked up to her, her confidence helped my confidence develop," she said.

"I saw a model who looked like me at the time, People said to me that I should try it out, I thought, 'why not' and pursued it."

She said Michelle Grace from the Curve agency is the woman who inspired her most.

"She is actually the one who recognised the gap in the market and believed in me."

She made it to the top 10 and she is now a contender in the first ever Miss Curvybody SA.

Tanda is also a proud plus size model, something she ventured into four years ago.

"I was asked if I was willing to lose weight and I refused point blank. The competition was for everyone and I wanted to represent the curvaceous women.

"Through my consistency I made it to the top 10," she said proudly.

Tanda said she loves to celebrate her African curves by breaking the norm.

She goes against what society deems "normal" and "desirable".

"Being a curvy woman, it is important to dress right and especially to understand your body," she said. But, in the same breath she said that big girls can also look sexy in clothes considered only appropriate for skinny women.

She is currently also one of the faces for Donna and intends pushing her modelling career further.

Ashley Graham is not the only pioneer in plus-size modelling . Locally we have our own heroes who are redefining what beauty should entail.