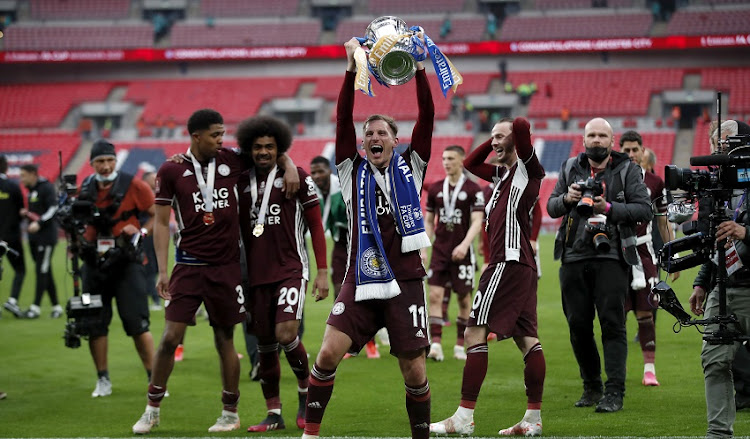 A magnificent long-range strike from Youri Tielemans gave Leicester City their first FA Cup triumph with a 1-0 victory over Chelsea at Wembley on Saturday, in front of the biggest crowd in England since March 2020.

A landmark day, as 21,000 fans returned to the national stadium after last year's final was played behind closed doors due to the coronavirus pandemic, ended with emotional scenes as Leicester's Thai owner was invited on to the field to celebrate with the team.

Aiyawatt Srivaddhanaprabha's father Vichai, whose ownership helped transform the Midlands club, died in 2018 in a helicopter crash at Leicester's stadium.

"We have a picture (of him) on the inside of our shirts so he's always with us. This is what we've dreamt of and talked about for so long," said Leicester keeper Kasper Schmeichel whose late saves were crucial to the victory.

Leicester had been beaten in all their four previous FA Cup final appearances, most recently in 1969, and it was a goal that will be remembered as one of the finest in the competition's 149-year history that earned their maiden win.

There was late drama when Wes Morgan put through his own goal in the 89th minute to get Chelsea thinking they were taking the game into extra-time, only for VAR to rule it out for offside.

Even after a loss, however, the Chelsea supporters will surely look back with fondness on a day when for the first time in over a year there was a real football atmosphere with the reduced capacity crowd filling the 90,000-capacity stadium with noise.

Thomas Tuchel's Chelsea dominated the first half but struggled to create major openings, even after Leicester lost their centre half Jonny Evans to injury in the 34th minute.

Tielemans's goal will count among the finest to win this 149-year old competition. Collecting the ball centrally he pushed forward and as the Chelsea defence backed off he unleashed a perfectly struck drive which the diving Kepe Arrizabalaga could do nothing about.

Chelsea felt there had been a handball in the build-up but they still had chances to get back on level terms.

Former Leicester full back Ben Chilwell, on as a Chelsea substitute, had a header pushed against the post by Schmeichel the Dane did even better to keep out a goalbound late effort from the dangerous Mason Mount.

There was late drama when Chelsea thought they had levelled after Caglar Soyuncu attempted to clear a Chilwell cross and the ball struck Morgan before ending in the net.

To Leicester's relief and Chelsea's dismay, however, the VAR replay showed that Chilwell had been offside.

The final whistle prompted emotional celebrations from Leicester, the 2016 Premier League winners who enjoying the most successful period in their history.

For Leicester manager Brendan Rodgers this was his first trophy in English football to follow his successes in Scotland with Celtic.

"It's an amazing feeling, I wasn't aware before I came to Leicester that they'd never won the FA Cup, they'd lost in four finals previous so to be able to give that to the owners and the fans, so special," the Northern Irishman said.

"So proud, the board players staff, supporters, it is an amazing day for the city.

"Youri Tieleman's goal was like an old school FA cup winning goal but also Kasper Schmeichel's save, those are the special moments you need in games," he added.

Tuchel still has a chance of lifting silverware when Chelsea face Manchester City in the Champions League final on May 29 in Porto.