Ernst Middendorp: The reason why Chiefs could not score more goals against nine-man Chippa 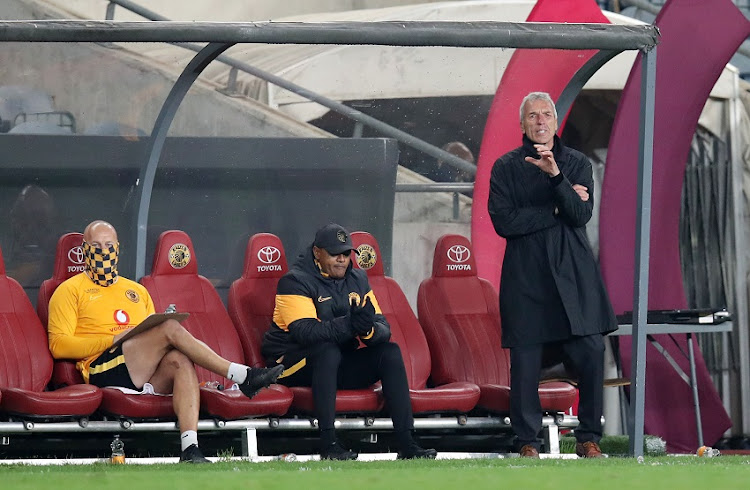 Kaizer Chiefs would have liked more goals against Chippa United but a combination of a short recovery time and the Absa Premiership leaders falling into the trap of playing too deep against a team reduced to nine men prevented that‚ Amakhosi coach Ernst Middendorp has said.

A 1-0 win at Orlando Stadium kept Chiefs' destiny effectively in their own hands.

A win against second-last Baroka FC at Bidvest Stadium in Saturday's final round should be enough for Amakhosi to end their four-season trophy drought with a much-coveted title in their 50th anniversary season.

But second-placed Mamelodi Sundowns did reduce the goal difference margin (Chiefs now are on +21‚ and Downs +18) with a 3-0 win against now all-but relegated Polokwane City.

If both the top two teams win in Saturday's blockbuster completion to the longest Premiership season on record‚ Sundowns will need at least a 5-0 victory over third-last Black Leopards (if Chiefs win 1-0) to go past Amakhosi on goal difference and defend their title.

"I think the two red cards for Chippa give you an indication that it was about tonight - fighting from both teams to get the points done‚" Middendorp said after Wednesday night's win.

"The way to play football is definitely not what the club stands for‚ I fully agree. But I think it's very crucial to mention that we played on Sunday‚ late afternoon‚ and Chippa last played on Friday.

"Meaning‚ with eight games in 24 days‚ these two additional recovery days is a huge difference.

"We had a number of players before where we had to ask ourselves‚ 'Will it be possible to have Erick Mathoho on the field?'‚ and some other players.

"We had to replace some players during the 98 minutes just for this reason - Siyabonga Ngezana on for Mathoho‚ Ramahlwe Mphahlele on for Kgotso Moleko.

"But here you can see‚ I think everybody was capable and did the job."

With a single-goal advantage‚ and Chippa looking capable of scoring the other way‚ Chiefs pressed for a second in the second half but had to be circumspect of conceding a disastrous equaliser.

In fact‚ they did‚ but referee Jelly Chavani incorrectly overruled Boikanyo Komane's header‚ when Amakhosi goalkeeper Itumeleng Khune had tripped over his own player.

Middendorp admitted frustration that Chiefs fell into the trap‚ as Chippa were reduced to 10 then nine men with the dismissals of Tercious Malepe and Elvis Moyo‚ of playing too deep and being unable to press home that advantage.

"It was absolutely our intention to go and press‚ and I think you could see it in the first half‚" he said.

"Then what are you doing in the second half‚ knowing that the long balls are coming from the opponent? Definitely our biggest intention was to get the three points‚ [although] probably with a bit better game management in the second half.

" ... It's always different [playing against nine men]. You see it worldwide‚ where players are thinking‚ 'Now we can do a little bit less‚ we can do a bit less press‚ we can step back because the opponents have two players less'.

"But this is an irritation. This is absolutely not the way.

"It was also a bit giving the ball away too quickly. But for me fully understandable referring to our conditioning‚ and recovery time where against Wits we put in a lot of effort.

"And for me it was not a surprise to see that BidVest lost against Black Leopards tonight."

All Saturday's final-round matches kick off at 3.30pm.