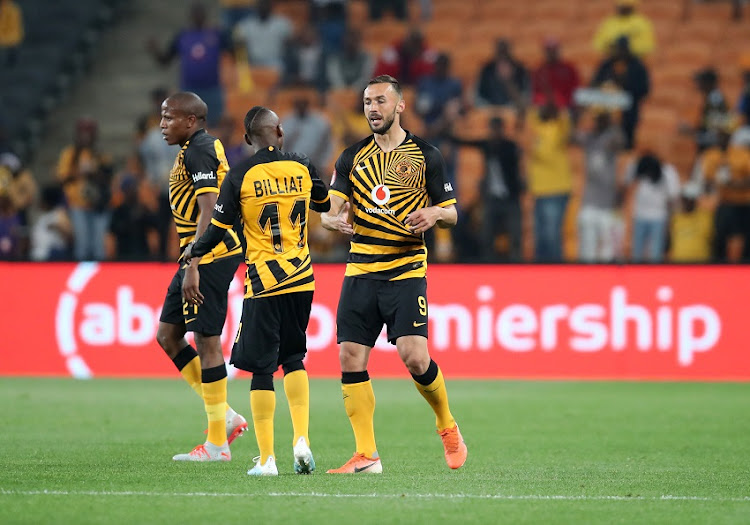 Samir Nurkovic celebrates goal with teammte Khama Billiat of Kaizer Chiefs during the Absa Premiership 2019/20 match between Kaizer Chiefs and Supersport United at the FNB Stadium, Johannesburg on the 24 August 2019.
Image: ©Muzi Ntombela/BackpagePix

Mamelodi Sundowns had the title-winning trio of Leonardo Castro‚ Khama Billiat and Keagan Dolly – the ‘CBD’ - that led them to title success and effectively set in motion the current dynasty that sees the Brazilians at the top of the South African soccer tree.

But log leaders Kaizer Chiefs might steal a leaf out of that playbook and introduce their own version of the magical trio‚ using two of the successful Sundowns ingredients.

Billiat and Castro reprised their partnership on Saturday as Chiefs overcame Cape Town City in the Telkom Knockout and Samir Nurkovic came on as a third striker to score as the visitors came from a goal down to win on post-match penalties.

It suggested the birth of the ‘CBN’‚ something coach Ernst Middendorp hinted he thought was possible too.

“Why not Leonard‚ Samir and Khama … we will see‚” he said before quickly warning that if he played three in attack they would have to work to help out the defence too‚ probably a veiled warning to Billiat about his workrate on the back foot.

“Even if you just do a step and close some passing lines‚” added the Chiefs coach.

“As long as we understand our roles but I’m always saying that everybody is part of the team in terms of forward movement and in terms of defence.

“If we can agree about it‚ they can play.”

“Samir is an exceptional player‚" he said.

"He was out for three weeks and not really able to train.

"Then it’s difficult to choose.”