Pitso Mosimane on George Lebese: 'We gave him a chance‚ let’s be honest' 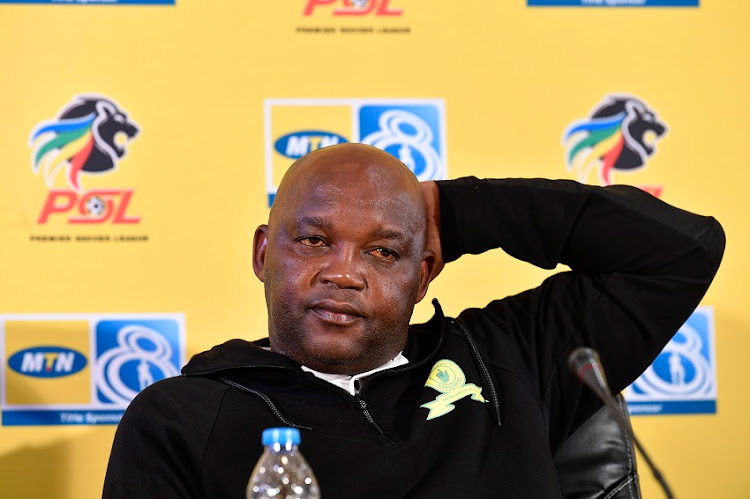 Forthright Mamelodi Sundowns coach Pitso Mosimane says he gave George Lebese enough opportunities to command a regular place in the team but the midfielder didn't grab the chances that came his way.

Lebese‚ who spent almost two seasons at Chloorkop‚ faces an uncertain future after he was released by Sundowns during the transfer window a few days ago.

“Teams like Sundowns‚ Chiefs and Pirates we are all affected.

"Even Wits signed players last year‚ did they play?” said Mosimane when asked for the reasons that led to the decision to offload Lebese.

“It's life and it happens.

"These things happen‚ it’s just that we (Sundowns) are in the spotlight.

"We gave him a chance‚ let’s be honest.

"He played games and sometimes when it doesn’t work out players tend to say other things.

“Some are honest and say 'look I got a chance to play and I was training every day'.

"Some would probably say 'I was victimized because I was doing exceptionally well at training and I was not given a chance to play'.

"I don’t victimise players because I don’t like you as a person.

"We are football people and our common objective is for Sundowns to win games.”

Lebese joined Sundowns from Kaizer Chiefs in a high-profile transfer in August 2017 but the winger never really made an impression at Chloorkop after making a few appearances in the Brazilians' shirt during his stay.

After complaining about his lack of game time‚ Lebese joined Supersport United on a six-month loan deal in January but that move also failed to yield the desired results after he made just seven appearances.

He returned to Sundowns at the end of last season but parted ways with the Brazilians on the last day of the transfer window last week.

Mosimane dismissed critics' claims that he had an agenda against Lebese and never warmed up to the player since he arrived from Chiefs.

“I don’t have an agenda‚" said Mosimane.

"Also‚ it doesn’t mean that a coach will always like the personality of a player but at the end of the day we are not in a popularity contest.

"We are in a football environment and if a player is good and playing well then he must play.

"A player will prove you wrong on the pitch.

"The coach can’t hide it‚ if the guy plays well and scores‚ we have to give him an opportunity to play again.

“So it is good that he acknowledged that there were mental strength issues.

"He is a very good football player but you have to make it because you are judged by that.

"He spent more than a year with us and he was given a chance to play to be honest.”