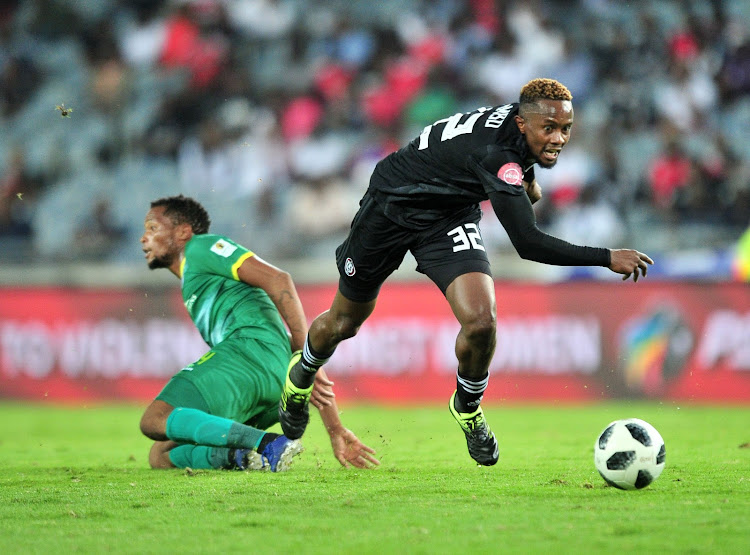 Vincent Pule saved Orlando Pirates some blushes with an 87th minute brilliant header to at least earn the Buccaneers a point in a frustrating Absa Premiership match against a Baroka FC side that looked to hold to their early to steal all the three points.

Pirates needed to beat the Limpopo side by more than three goals to move above Bidvest Wits at the top of the Premiership table but the draw kept them two points adrift.

The draw underlined Pirates struggles at home this season as they came to this match having collected 13 points from a possible 24 in eight previous league matches they had played in Orlando.

Pule’s header came as result of all the pressure which was being piled by Pirates in the second half but the man who should take the more credit is striker Augustine Mulenga.

The Zambian striker took all the time he needed before delivering a pin point cross for Pule to score his sixth goal of the season and second against Baroka.

Much against the run of play Baroka took the lead in the 12th minute when Baroka winger Matome Mabeba beat Jackson Mabokgwane hands down with a stunning direct free kick 25 yard outside the area.

Mabeba is now more of a free kick specialist for Bakgaga as the cracker against Bucs was almost identical to the one he scored against Wits when they knocked the Clever Boys out of the Telkom Knockout on their way to beating Pirates 3-2 on penalties in the final in Port Elizabeth in December.

At the centre of the park is where Pirates lacked in vital decision making in this match with Linda Mntambo and Ben Motshwari lacking the understanding and skills to outwit Baroka’s central midfield pairing of Tebogo Sodi and Goodman Mosele.

The second stanza was dominated by more time spent on stoppages with Baroka players breaking down all the Pirates momentum by collapsing at the slightest of provocation by their opponents.

Baroka keeper Elvis Chipezeze was the main starring in this acting, collapsing at every turn after he had made an attempt to save even the tamest of the shots directed at him.

But the other biggest offender was the match official Abongile Tom who failed time and again to punish Baroka players for feigning their injuries.

Tom only showed Chipezeze in the dying minutes of the match from when the Zimbabwean born gloveman continued with his time wasting tactics.

Clearly avoiding fatigue, Bucs coach Sredojevic looked to rest some of his regulars for the tough first round Nedbank Cup encounter against Black Leopards in Thohoyandou on Saturday.

Midfield anchors Xola Mlambo and Musa Nyatama alongside Innocent Maela, Thembinkosi Lorch, Kudakwashe Mahachi and Asavela Mbekile were among six changes made by the Serbian coach to the team he started with in Caf Champions League match against Horoya AC here on Friday.

Making a rare appearance this season after a lengthy spell on the side lines due to injury was right back Mthokozisi Dube, who together with Nyasha Munetsi, Motshwari, Mako Paseka, Pule and Mntambo were among the six players who didn’t start against Horoya.

Dube only played two matches early in the season and last night played more as a wingback as Sredojevic preferred a 3-5-2 formation which had Mako also roving up and down the line on the left with captain Happy Jele, Munetsi and Alfred Ndengane left to man the defence.