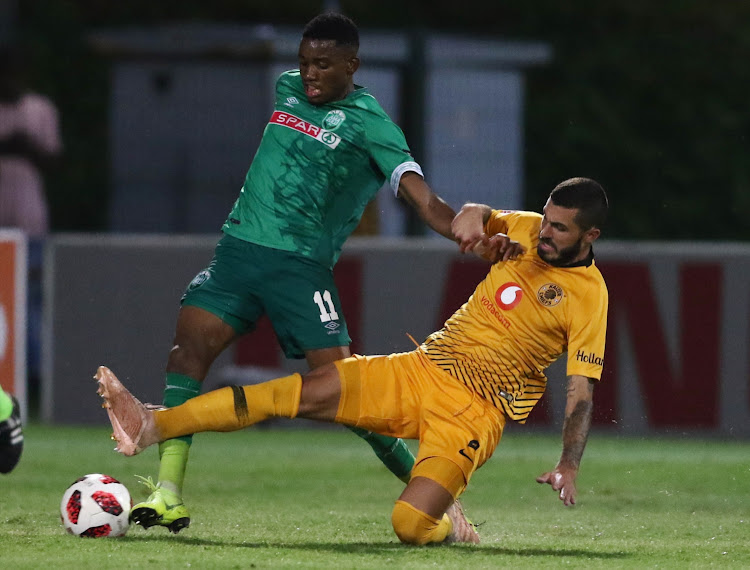 Kaizer Chiefs put in a polished attacking performance, though less so in defence, as they intelligently dismantled AmaZulu 3-2 in a scoreline that flattered Usuthu at King Zwelithini Stadium in Umlazi on Wednesday night.

Marc Van Heerden's own goal in the first minute put AmaZulu on the back foot in the Absa Premiership fixture.

In an exciting second half ex-Chiefs winger Ovidy Karuru equalised in the 62nd, but Bernard Parker smashed Chiefs back into the lead in the 64th.

Willard Katsande's 79th-minute strike appeared to earn a comfortable victory for Chiefs. But Van Heerden's goal in the 93rd made the game seem closer than it had been.

Cavin Johnson's AmaZulu in Durban have been one of the tougher teams to face this season. Following the blow of having six points deducted in late September for ridiculously ignoring a Fifa disciplinary order over an ex-player's contract they had fought their way up from the bottom of the table into 13th coming into Wednesday night's game.

Chiefs inflicted the first league defeat in Durban on AmaZulu.

Amakhosi coach Ernst Middendorp sensibly rested Khama Billiat, who had been especially ineffective in his last two games having taken too much of the attacking responsibility on his back for Chiefs at the start of the season.

Bernard Parker was given a start at deep striker behind Leonardo Castro, and the warhorse was champing at the bit. The former Bafana Bafana striker and Hendrick Ekstein just behind him were the creative cog that dismantled AmaZulu.

Usuthu went on the back foot through Van Heerden's own goal that was only barely the Usuthu centreback's fault.

Fellow central defender Tapelo Nyongo attempted a foolish backpass from the right touchline to crowded goalkeeper Siyabonga Mbatha. The Colombian beat the keeper, his shot ricocheting off the left upright onto the right and across the line again, Van Heerden's awkward, unfortunate attempt to clear only steering the ball in.

Middendorp would have been pleased at the manner in which Chiefs struck back almost immediately, and the manner of the goal came too.

From substitute Kabelo Mahlasela's free-kick, Parker emerged from two markers, Van Heerden's attempted header misconnected, burst down the right and belted the synthetic cover off a shot from a tight angle that screamed in past Mbatha.

With 11 minutes left Parker chested down Emmanuel Ntiya-Ntiya's chip and forced a save,

The resultant corner, by Mahlasela, was a training ground set piece as Parker flicked on to Mario Booysen on the edge of the box, who spooned inside in the direction of Katsande, who scrambled over from close range.

With Usuthu falling apart, Mahlasela put Ekstein through alone, who chipped Mbatha, but somehow to the wide of the left upright.