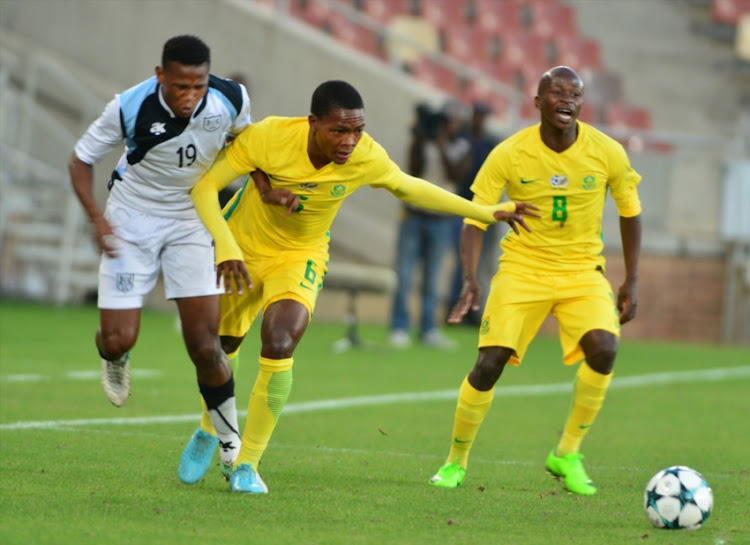 For the second year running Bafana Bafana were the Plate section winners of the Cosafa Cup, beating Botswana 3-0 in the final at Peter Mokaba Stadium on Friday night.

Another seemingly record-low crowd of a few hundred people, including one tiny heroic group led by a drummer who saved the day drowning out the silence by singing for the 90 minutes, attended - again, despite the free entrance.

Bafana utilised their better pace in interchanges and organisation to muscle all the chances, and lead the first half from Motjeka Madisha's 40th-minute strike.

Botswana regrouped and soaked pressure better in the second, SA made to work harder for Maphosa Modiba's 78th-minute second. By the time Lebohang Maboe added an 89th-minute third Botswana had unravelled.

Bafana coach Stuart Baxter made one change from his starting lineup who beat Namibia 4-1 in the Plate semifinals, Chippa United's Paseka Mako coming in at left-back, and Modiba pushed into central midfield for suspended Fortune Makaringe.

This was a tough Botswana to beat. Under former Black Leopards and Santos coach Major David Bright they had not lost in regulation time in five matches at the Cosafa Cup.

They beat Angola, drew with Malawi and cruised past Mauritius 6-0 in the group stage, then lost on penalties against full-strength Zimbabwe, the tournament favourites, in the quarters. Even in their fifth game in eight days, notably tiring in the second half, they beat Swaziland 2-0 in the Plate semis.

The first half for Bafana was almost a replica of their opening 45 minutes in their penalties quarterfinal defeat against Madagascar.

In that game South Africa created three clear first-half chances, but could not score. Against Botswana South Africa manufactured two clear openings, and two half-chances, crucially scoring from one of them.

The first half-chance came when Ryan Moon headed wide at the near post from Siphesihle Ndlovu's cross from the right just past 15 minutes.

Gift Links's cross was cleverly headed down by Moon into the path of Ndlovu, who steered a half-volley past the upright.

Maboe curled one from the edge of the area onto the top-netting, as the young Bafana ensured the first half was one-way traffic.

The resultant corner was taken short to Modiba, who swung in a cross that found Madisha steaming in, and Mwampole Masule having come off his line and missed, the Mamelodi Sundowns centreback beating the Zebras goalkeeper to the header for SA's winner.

Botswana began the second half with their only two real chances, danger playmaker Onkabetse Makgantai getting a touch across the face and right-back Tshepo Maikano turning a header over.

Bafana returned to the front foot, though less convincingly.

But, as Botswana had to commit some numbers forward in search of an equaliser, Bafana opened them on the counterattack, Ndlovu picking out Modiba as three players beat offside, who steered into an unguarded goal.

Then Maboe was played through alone to round Masule and score his tournament third.