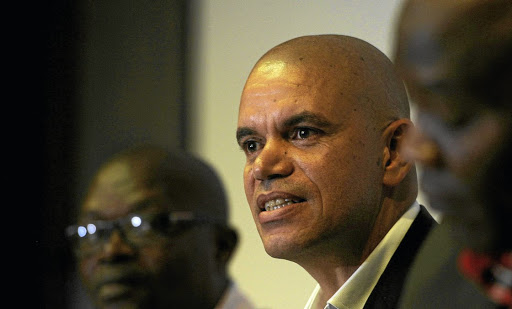 Ncobo was the only candidate set to run against Jordaan in what has been one of the most dirtily-fought buildups to a Safa presidential election.
Image: Veli Nhlapo

Ace Ncobo has walked out of the South Africa Football Association (Safa) elective congress at Sandton Convention Centre‚ leaving Danny Jordaan to stand unopposed and be elected for a second term of five years.

Ncobo claimed to have been threatened while returning to his seat after raising several objections to the election continuing.

He then asked to be withdrawn from the process and walked out.

Ncobo was the only candidate set to run against Jordaan in what has been one of the most dirtily-fought buildups to a Safa presidential election.

Ncobo was asked what his next move is form here.

"We will have to review that. The decision cannot be mine‚" he said.

"I did not nominate myself. There are a whole lot of other people who must make the decision in terms of where to from now."

Ncobo said the election was continuing illegally and unlawfully. Asked if he‚ or his backers‚ would contest the result‚ he responded: "Again‚ that decision cannot be mine. It's a collective decision.

"I have registered there‚ inside congress‚ formally - it's minuted - that I said this thing is unprocedural‚ unlawful and it is organised illegally."

Ncobo was asked the details of the alleged threats he received.

"As soon as I announced that I want my name removed from this thing there were delegates who started threatening me‚ especially one gentleman who was close to my table who threw all kinds of insults and threats.

"I don't know his name. I can't repeat the things that he said‚" Ncobo said.

Jordaan‚ still involved in the elective congress‚ where his new term had to be ratified and a Safa Council (formerly the National Executive Committee‚ or NEC) had to be elected‚ was not immediately available for comment.

He was expected to speak in a press conference once the congress was concluded.

An urgent application has been brought to halt the Safa elective congress.
Sport
3 years ago

Ncobo questions legitimacy of the elective congress.
Sport
3 years ago
Next Article