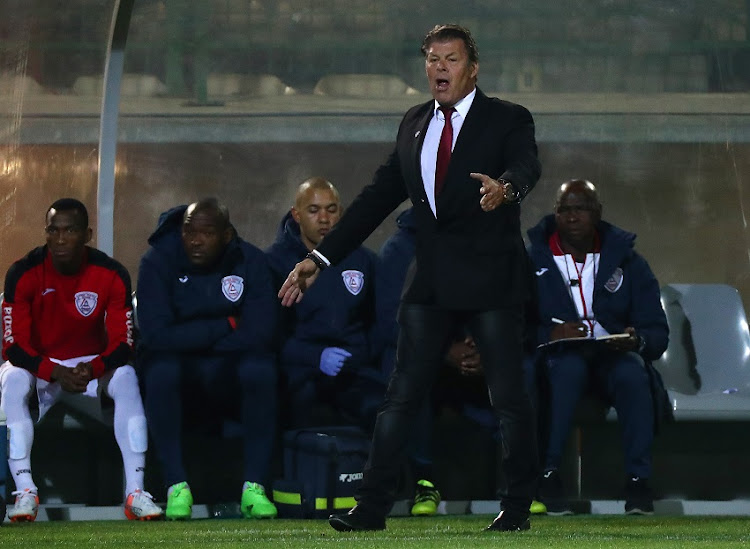 Luc Eymael will have to sit in the stands for Saturday’s Nedbank Cup quarterfinal clash against Ubuntu Cape Town at the Athlone Stadium after the Premier Soccer League handed the Free State Stars coach a suspension.

He is banned for two games and received R50 00 for a touchline altercation against AmaZulu at Goble Park on February 24.

AmaZulu assistant-coach Alan Clark was manhandled by Stars’ officials and goalkeeper-trainer Davies Phiri faced a tirade of abuse from Eymael‚ including threats to “kill him” at the end of the drawn game.

The match commissioner reported the incident to the PSL and the Belgian-born coach has accepted the punishment.

Roger de Sa has had his touchline ban extended after his sending-off at the end of the controversial defeat at the hands of Maritzburg United on February 23.

De Sa had a verbal altercation with referee Victor Gomes after the 2-1 loss but said afterwards he had only said: “Victor‚ come on man‚ you can’t have the Gomes Show every week.”

De Sa told reporters: “Those were my exact words. Is that a red card? That’s all I said. I was actually trying to give him a bit of advice.

“And he turned around and said that was ‘ungentlemanly conduct’ and gave me a red card. You need a bit of common sense and a bit of an IQ sometimes.”

The club received R100 000 fine because De Sa spoke to the media after his sending-off and the coach must remain in the stands for an extra game.

De Sa served his suspension for the red card in subsequent games against Free State Stars and Bloemfontein Celtic but is now also forced to watch from the stands when Baroka play at Stars at the Royal Bafokeng Sports Palace on Wednesday.