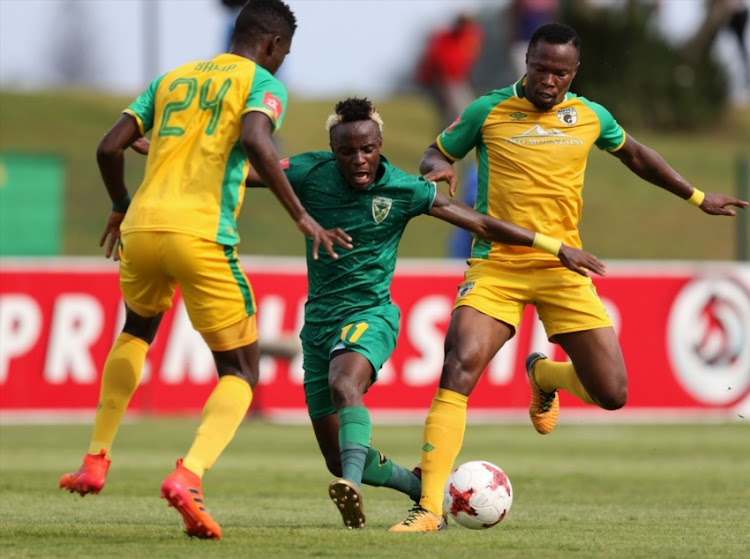 Kudakwashe Mahachi of Golden Arrows and Hassan Banda of Baroka FC during the Absa Premiership match between Golden Arrows and Baroka at Princess Magogo Stadium on January 28, 2018 in Durban.
Image: Anesh Debiky/Gallo Images

Gift Motupa moved into second place in the Absa Premiership scoring charts as he grabbed both for Baroka FC in a 2-2 away draw at Lamontville Golden Arrows on Sunday afternoon.

Motupa put his side in the lead early in the game and then grabbed a 75th minute equaliser to take his tally for the season to eight goals‚ one behind leader Rodney Ramagalela of Limpopo neighbours Polokwane City.

He has scored more goal than games he has started‚ having been used mainly as an impact player.

But while he might not have the fitness‚ he certainly knows his way to the back of the net.

The point means Baroka moved up one place to seventh in the standings after garnering a difficult away point at the Princess Magogo Stadium in a game hit before kick off by an heavy rainstorm.

“Half a loaf is better than nothing‚” said Baroka coach Kgoloko Thobejane‚ who bemoaned his side’s inability to keep possession in the game.

Arrows scored goals through Danny Venter and Knox Mutizwa‚ coming from one down to be 2-1 up but remain in 10th place.

They have a single win from their last 15 games.

“Both goal we conceded were against the run of play.

"We are a team moving in the right direction‚” said Arrows coach Clinton Larsen.

Baroka‚ starting the day in eighth place‚ rattled the woodwork with a long range shot from Mduduzi Mdantsane after just 13 minutes and then took the lead four minutes later as Motupa burst through on the left hand side‚ taking advantage of hesitation by Sandile Zuke to force his way towards goal and convert from a tight angle.

The ex-Pirates player should have had a second goal in the 25th minute after a good first touch to a long pass and another burst of speed forward only to blast over the top.

Lucky Nguzana‚ who had scored for Baroka against his old club Kaizer Chiefs last weekend‚ also proved a handful for the home defenders and his strong run ended with a shot that Nkosingiphile Gumede touched over the top.

But Arrows‚ who were wasteful with their half chance after some clever build-up play‚ got an equaliser three minutes before the break as Venter cut inside to fire home as he beat Virgil Vries at his near post.

Lerato Lamola came on at the start of the second half to provide some fore to Arrows’ attack and it was his shot that led to their second goal with Vries unable to hold on and Mutizwa following up to score.

Mutizwa had been sloppy throughout and the supporters were baying at the coach to take him off.

And so when he scored‚ he ran across to them with his ear cupped in a gesture of defiance.

Motupa’s second came courtesy of a lucky bounce off his teammate Robin Ngalande but when presented with the chance for a snap effort from close range‚ Motupa needed no second invitation.