Chiefs fight back to snatch point against Free State Stars 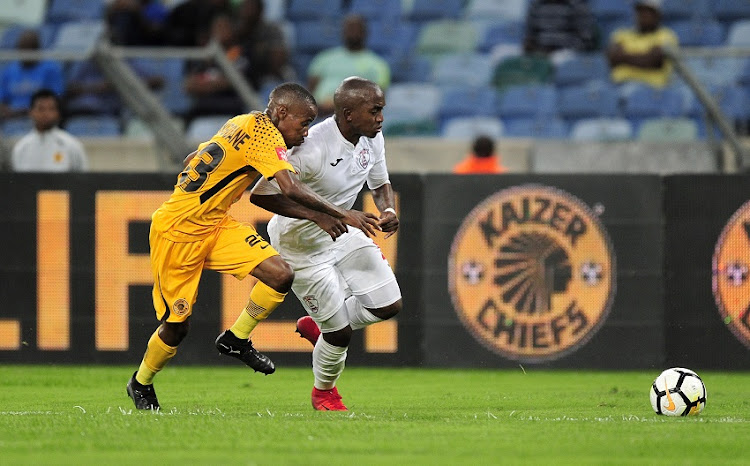 Kaizer Chiefs spurned a golden opportunity to move into second position when they were held to a 1-all draw by Free State Stars at the Moses Mabhida Stadium in Durban.

The goals came in a frenetic three minute second half period of a game that at best, flattered to deceive.

Chiefs had the better of a vaguely entertaining first half where two chances from George Maluleka where the best the home side could offer.

The 21st and 38th minute chances originated from the creative and pacy Gustavo Paez, whose forays down the right hand side often caught Free State Stars flat.

Paez’s cut-back passes were perfect shooting platforms for Maluleka but they both went narrowly wide of Ali Sangare’s net.

Bernard Parker also had a decent 41st minute opportunity from Joseph Molangoane’s cross but the chance went wide. Free State Stars had two very early chances through Sinethemba Jantjie and Thabo Maphakisa which were not converted.

Siphiwe Tshabalala also had a shot that had the beating of Sangare but not that of Sifiso Mbhele, who had to come off with a strained hamstring.

Embattled Kaizer Chiefs coach Steve Komphela also sought to keep the nucleus of the side that escaped with a goalless draw against AmaZulu on Wednesday evening.

Tshabalala was the only change, starting ahead of Hendrik Ekstein while the new centreback combination of Teenage Hadebe and Siyabonga Ngezana resuming their partnership.

There was better enterprise in the second half but Free State Stars took the in the 64th minute on the back of sloppy work from Molangoane. The winger passed carelessly and the ball was intercepted by Nhlanhla Vilakazi, whose long range shot deflected off Daniel Cardoso and the secondary swerve was enough to wrong-foot an angry Itumeleng Khune.

It only took Chiefs three minutes to respond through Bernard Park, who was the recipient of Willard Katsande’s hard work and pin-point assist.

Stars though were rather unfortunate not to take the lead in the 53rd minute when Jantjie’s snap-shot was well saved by Khune.

Nyiko Mobbie should have done better with his 78th minute chance while Bhongolethu Jayiya and Tshabalala over-elaborated in an attempt to score nine minutes later.

Molangoane’s injury time shot also came off the bar, allowing the visitors to escape with a point.