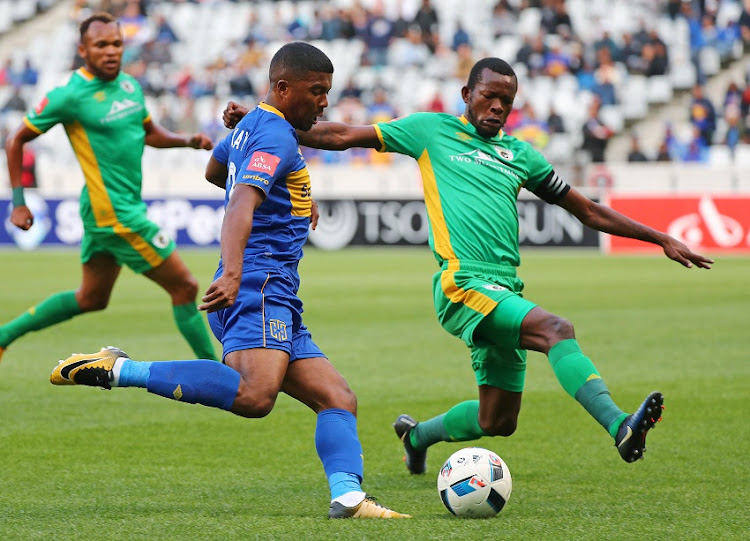 Craig Martin scored his first career goal for Cape Town City as they were held to a 1-1 draw by table-topping Baroka FC at a we Cape Town Stadium on Tuesday night.

Malawi international Robin Ngalande had put Baroka ahead in what was a closely-fought game, before Martin equalised and City then bombarded the visitors’ goal with shots.

The big team news for the home side was the sight of Aubrey Ngoma on the bench, his first appearance in the match-day squad since a serious knee injury sustained in June.

He did not get on, but the wet conditions may have had something to do with that.

City coach McCarthy opted for Letsie Koapeng as his lead striker with Victor Obinna out injured, and neither Judas Moseamedi or Lehlohonolo Majoro on the bench.

Baroka coach Thobejane made two changes from the side that drew 1-1 at AmaZulu at the start of the month, dropping Guft Motupa and Richard Matloga to the bench, to be replaced by Ngalande and Siphelele Ntshangase.The first half was devoid of clear-cut chances and neither keeper had a serious save to make.

City right-back Thamsanqa Mkhize made a vital interception to Talent Chawapiwa’s cross with Ngalande lurking just behind and ready to pounce.Home captain Robyn Johannes spread the ball wide for an on-rushing Ebrahim Seedat from the left fullback position and his inviting cross was headed over by Koapeng.

Baroka had a decent opening when some neat build-up play allowed Sipho Moeti to shoot from the edge of the box, but his effort flashed just wide.

Teko Modise then had a wild swing at the ball from 25-yards that ballooned well over as he showed considerable rustiness and battling to get his acclaimed passing game going.

He had a free-kick chance early in the second half that was straight at Virgil Vries in the Baroka goal.

Out of nowhere, the visitors managed to carve open the City defence and Ntshangase raced clear on goal, only to seem undecided whether to shoot or cross and he allowed Johannes to scramble back and make a block.

Taariq Fielies was next to get in a vital block as the excellent Chawapiwa set up Ntshangase, who this time got his shot away but saw it deflected over the bar.

By now Baroka were piling on the pressure and minutes later the opener arrived as Ngalande was fed into space on the left and his low shot across goal nestled in the bottom corner. It was his first goal in the league for three-and-a-half years.

Koapeng should have equalised when he was found in acres of space in the box by Lyle Lakay, but his first touch was heavy and by the time he got his shot away, it was blocked.

But the home side did find a leveller when Lakay’s speculative shot took a deflection and skipped off the wet pitch, and Martin was on hand to steer it home for the first goal of his professional career.

Ayanda Patosi then flashes a shot wide after excellent build-up play from substitute Sibusiso Masina, and Koapeng then somehow contrived to miss a chance from six-yards when Patosi’s cross was missed by the Baroka defence and he appeared to stand on the ball.

The wet pitch was causing havoc and Vries made an excellent save as Patosi’s cross was sliced towards his own goal by Olaleng Shaku.

Baroka then should have hit the front again when Gift Motupa found himself with a free header, but he could only steer it at City keeper Sage Stephens.

Roland Putsche had a free header of his own that he put wide in injury-time, while the entire City bench erupted in celebration as Martin side-footed an effort on goal, only to realise it had missed by inches.

Next up for City is an away trip to Lamontville Golden Arrows on Saturday, while Baroka host Platinum Stars on Sunday.