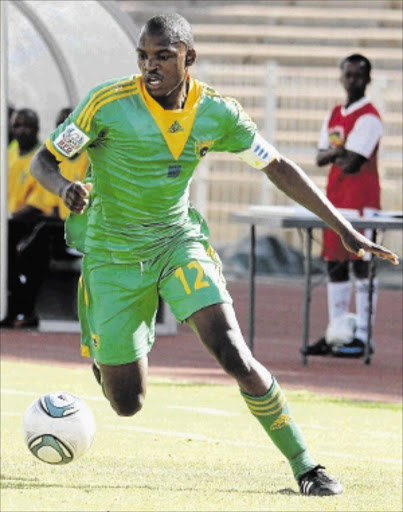 Baroka FC coach Kgoloko Thobejane has revealed that he could not believe his luck when Orlando Pirates agreed to loan his team attacking midfielder Gift Motupa at the beginning of the season.

Motupa returned to Baroka after he spent two seasons with mixed success at Pirates‚ where he struggled to establish himself as a regular starter under coaches Eric Tinkler‚ Muhsin Ertugral‚ Augusto Palacios and Kjell Jonevret.

The big forward‚ who has found form again returning to his team of origin‚ is likely to star for Baroka in Saturday night’s Telkom Knockout quarterfinal against Bidvest Wits at Bidvest Stadium (kickoff: 8.15pm).

“That day when the chairman Khurishi Mphahlele told me that Motupa was coming back to us on loan I could not believe my luck. I was like an excited dog wagging its tail and creating a lot of dust on the ground‚” Thobejane said adding that he played a role in the midfielder’s development at the club.

“This boy comes from my hands and I raised him for 14 years. I know what he knows in football and make no mistake he can score goals.

Motupa has made an immediate impact on his return to Baroka as he is their leading scorer in the league with five goals from 10 matches.

He has not scored in cup competitions yet‚ but has a chance to break his duck againsrt Wits.

Leaders Baroka FC could prolong their stay at the top of the PSL log for the next three weeks if they collect maximum points against unpredictable ...
Sport
4 years ago

Baroka FC coach Kgoloko Thobejane has likened his working relationship with Kaizer Chiefs legend Doctor Khumalo to a fire that he says will take some ...
Sport
4 years ago

On-loan Baroka striker Gift Motupa might be enjoying himself at Bakgaga but has not erased Orlando Pirates from his heart as he would like to return ...
Sport
4 years ago

Kgoloko Thobejane has never been one to shy away from singing his own praises and the Baroka FC mentor was at it again on Thursday when he declared ...
Sport
4 years ago

Maria Sithole, 83, always knew that her grandson Oscarine Masuluke was destined for greatness.Masuluke, the 24-year-old Baroka FC goalkeeper from ...
News
4 years ago
Next Article