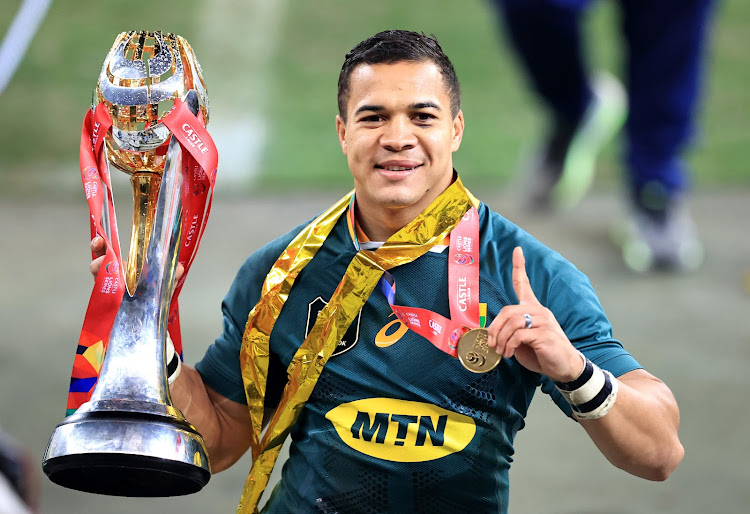 Springbok Rugby World Cup winner Cheslin Kolbe took time off from his busy schedule to share a story about his upbringing in the heart of the gang-ridden Kraaifontein township.

The Toulouse fullback said it wasn’t easy growing up in the northern Cape Town suburb where drugs and gang violence were the order of the day.

Speaking at Momentum Insure Science of Safety behind the scenes shoot of his first TVC that launched on Friday, the Kraaifontein-born star said he felt unsafe at a young age and it was his father, Andrew, who gave him a glimpse of hope.

The 28-year-old player was once considered by many to be too small to play professional rugby, let alone become an international star, but his background motivated him to work even harder for his dream.

“My dad never had that opportunity [to play rugby for his country] because of apartheid,  but I saw a bigger picture.

“I played in the streets, touch rugby and physical rugby, and we would literally go full-on at each other, with blood running and bruises.”

Kolbe thanked his parents for providing him with the little they had when growing up, saying that if it wasn't for them, the path to wearing the Springbok jersey would have not happened.

“I grew up in the environment where you never know what's going to happen to you on the day. You could simply be dragged into the gang violence and drug dealing,” he said.

“My parents and my family, laying out the foundation for me as a young kid, definitely evolved the way I saw life and the way I was protected. And that story mirrors Momentum Insure’s way of thinking.

“I could have easily become a member of the gangs, but I've always wanted a better [life] for myself and for my parents as well. They went the extra mile for me, although they didn't have much. They made the most of the little they had to give us better opportunities in order to succeed.”

His hard work on the pitch may have gone unnoticed when Kolbe walked away with the Players’ Player of the Year at the fifth annual BrightRock Players’ Choice Awards two months ago, but he is not bothered .