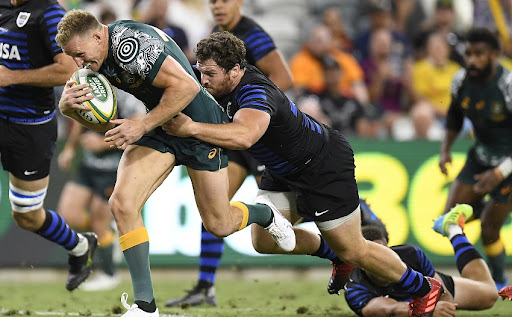 Reece Hodge of the Wallabies runs in to score a try during The Rugby Championship match between the Australian Wallabies and Argentina Pumas at QCB Stadium on September 25, 2021 in Townsville, Australia.
Image: Ian Hitchcock/Getty Images

Australia rode an early two-try burst to a comfortable 27-8 victory over Argentina in the Rugby Championship in Townsville on Saturday, winning three successive tests for the first time in four years.

If the match lacked the quality of the New Zealand-South Africa clash which preceded it at North Queensland Stadium, the Wallabies will be satisfied with a win to back up two victories over the world champion Springboks.

Fullback Reece Hodge and centre Samu Kerevi crossed in a bright first 20 minutes and winger Andrew Kellaway added a third try for the home side 10 minutes from time after the bench had brought new impetus to the attack.

The Pumas scored a single try through skipper Julian Montoya off a rolling maul to draw within nine points of the Australians just after halftime but remain winless after five rounds of the championship.