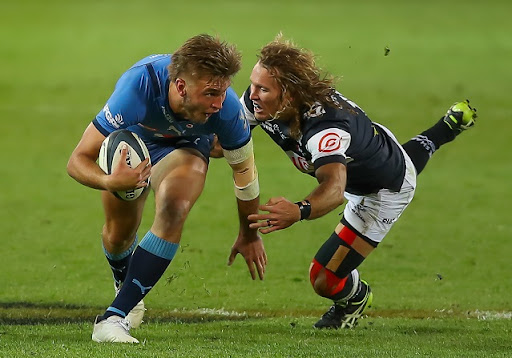 David Kriel of the Blue Bulls tries to evade a tackle from Werner Kok of the Sharks in the Currie Cup final at Loftus Versfeld in Pretoria on September 11 2021.
Image: Gordon Arons/Gallo Images

The Bulls have shown their United Rugby Championship (URC) intent in some high intensity training sessions as they prepare to open their campaign against Irish powerhouses Leinster at Lansdowne Road in Dublin on Saturday.

Jake White’s men will face a baptism of fire away against four-time European Champions Cup winners Leinster in the opening round.

The 22-year-old David Kriel, though, said the Bulls are bristling with confidence before their much-anticipated clash, and that the giants of rugby from Pretoria are ready for what's in store for them from SA rugby's new sojourn into the northern hemisphere game.

“We are Currie Cup champions,” fullback Kriel said. “We own it and we know we’re a championship side. We’re ready for what’s coming.”

It’s a mouth-watering kick-off to this new competition as the Bulls meet a team that has dominated European rugby.

Kriel said the Bulls are a winning combination built in SA's competitive domestic rugby environment and it won't be easy for any side to break them down.

This try saving tackle from David Kriel in the final was as clutch as it gets 👌🔥 pic.twitter.com/Bu27WRKVAO

“We’ve been playing consistently good rugby at home, so I don’t see why we shouldn’t gel on Saturday, regardless of who the opposition is,” he said.

The Pretoria outfit, though, still have the memory of their humbling defeat against Benetton in June’s Rainbow Cup Final in Italy at the backs of their minds.

“This is another opportunity to build on what we learnt against Benetton,” Kriel said.

“Everybody saw that game and it wasn’t our best performance.

“We didn’t play like the championship side we are. But we took that as a stepping stone for growth in our game plan and also as a team.

“The United Rugby Championship will be challenging but that can only be good for our squad and the rugby we’re playing.”